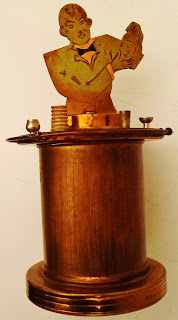 ...which probably explains why I think this 1930's Ronson cigarette dispenser is kinda cool.  Understandably, I do not wish to fork out $600+ for it so it will remain a pleasure denied at this point.

And no, I do not smoke cigarettes...at least not regularly...haven't smoked one in probably a decade, but when I did it was an occasional Camel filterless.  I just liked the smell, and like that great leader of days gone by, "I didn't inhale"...only in my case, it happens to be true.

Yes, a child of the 50's and 60's, I was raised by the WWII generation and grew up in a smoke filled home.  Unlike the wussified milquetoasts of today, it didn't bother me...my folks were good people and I have good memories from those days.

I suppose that's one of the reasons the Mad Men series grabbed me by the throat when it came out a few years ago...those people - minus the over dramatized, hyper sexualized escapades - were the adults in my world.  Men wore suits with fedoras, women sported dresses, they smoked cigarettes and drank cocktails in our living room.  I admired their sophisticated conversation, impeccable manners, and fashion sense...beat the hell out of the dumbed down drivel, boorish behavior, and neon hair with facial hardware of today.  Am I old yet?  Oh yeah... 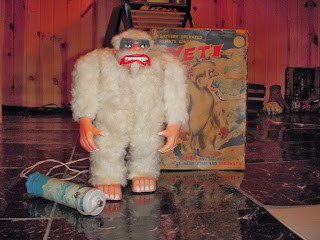 The box is pretty rough...it looks like they took what was left of the original and tried to join it to one that was still more or less intact.

Here's a video of Mr. Abominable in action:


This one is in great condition...he raises his arms and shrieks like he's supposed to, and shuffles forward...won't win any foot races - Rudolph and Hermie aren't in any immediate danger - but if the floor is level and not too slick, he'll eventually make his way to the goal.