A little stream of consciousness here...we watched "Midnight In Paris" the other evening, a fabulous film, even if it is by Woody Allen, he of questionable character and sullied reputation.

The story is this...a modern day man from the 2000's visits Paris, and much to his surprise, is able to slide back in time in a Peugeot at midnight to the 1920's.  When he does, he finds himself rubbing shoulders with the best known literati and artists of the day: F Scott Fitzgerald and Zelda, Cole Porter, Pablo Picasso, Salvador Dali, Gertrude Stein, and yes, even the great Papa Hemingway.

The handling of this time worn cinematic trick of time travel is remarkably well done, and you'll have no problem believing that Gil Pender (played wonderfully well by Owen Wilson), 21st century man, hobnobs nightly with the greats of the roaring 20's.

So why the blog title?  Hemingway lifted a line from John Donne's 1624 work named above (go ahead, look back at the title) for one of his novels, to wit:

"No man is an island,  entire of itself; every man is a piece of the continent, a part of the main; if a clod be washed away by the sea, Europe is the less, as well as if a promontory were, as well as if a manor of thy friend's or of thine own were;  any man's death diminishes me, because I am involved in mankind, and therefore never send to know for whom the bell tolls; it tolls for thee. "

I was in my garage the other day, enjoying an Arturo Fuente Short Story cigar - that I lit with my Ronson Touch Tip Junior Bartender lighter (thank you, Robert Adams of RonsonRepair) - alright, I admit it, and a glass of rye whiskey - when I had an unexpected encounter:

Ok, so maybe it wasn't all that unexpected...Mr. Bolts actually winters there in our garage...and spends his summers there...and springs...and most of the fall, too.  In fact, he only leaves for a week in late October when he makes his grand appearance on our front porch when we scarify things for All Hallows Eve.  He does a good job and is always a big hit with the trick or treaters.


In the mid century modern department, a picture of my loft: 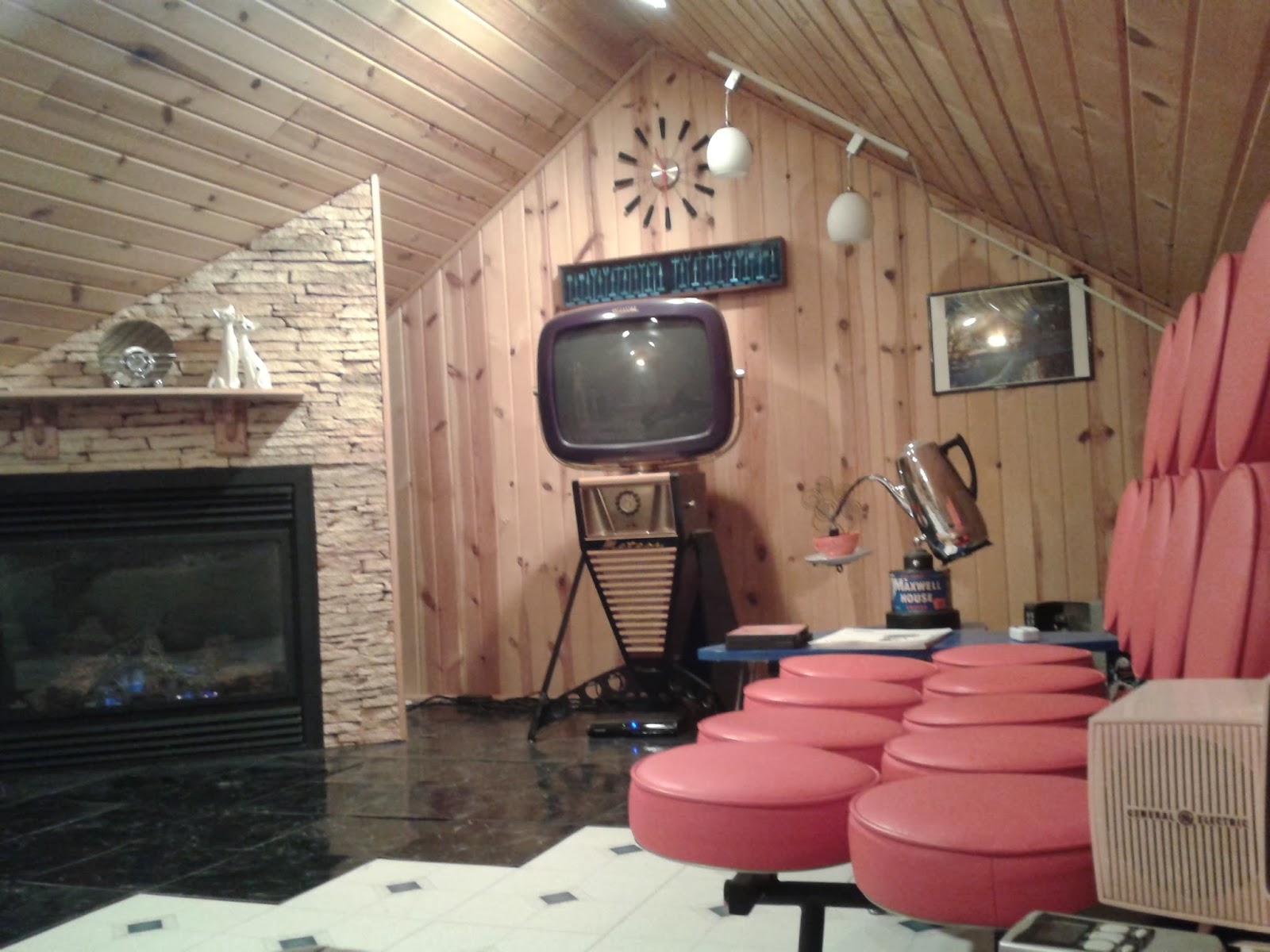 I like the stacked stone fireplace, the kitsch kats on the mantel, the Predicta tv and above that a 1962 Austin Cox aluminum chess set...above that, a Nelson style clock, and in the foreground, a Nelson marshmallow sofa.  Other design elements include the hanging lights for a sense of verticality, black and white linoleum flooring, and a partially obscured GE tube radio from the early 1960's in the bottom right corner of the photo.

Whenever I need to get my Draper on, this is where I hang out.

It's 5:30 am and another exciting work day looms, so roger willco over and out for now.