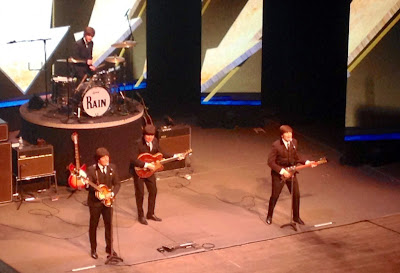 ...2015...great Beatles tribute band...went to their concert this past Wednesday and it was spectacular...they put on an outstanding show, tracing the different eras of the Beatles, from the very early 60's through their break up in 1970.

My favorite part is the early phase, when they burst onto the American music scene in 1964.  Besides doing spot on renditions of their hits, complete with Paul McCartney's flash bulb smile and little head bob, the liberal use of video from back in the day immerses you in that time in musical history.

As an added bonus, they use actual tv commercials from the early 60's, including a Fred Flinstone and Barney Rubble tv ad for Winston cigarettes...a complete scream.

But make no mistake, the music is why you should catch their show...remember the Beatles' "better than Jesus" scandal?  Well Rain's rendition of their hits is "better than the Beatles", and it's all live...no pre-recorded music is used at all.

I'm not a fan of Paul McCartney - in fact he can kiss my ass for his inappropriate political statements about George Bush while headlining an Obama White House event - but I do love the music he and his fellow mop tops produced a way on back in the day.

Rain is well worth your time and money whenever they come to town.

Feels like summer is actually trying to break through now...and Karen got lots more done in the back yard this weekend:

Watched a couple of great flicks this weekend...Gatsby on Friday, then Four Weddings And A Funeral on Saturday.  Gatsby is the best movie version of F. Scott Fitzgerald's classic I've ever seen, and the opening is a brilliant blend of the novel and real life.  It starts with Tobey Maguire as Nick Carraway being treated in a sanitarium for morbid alcoholism.  Of course Carraway is the the book's narrator, but Fitzgerald did battle alcoholism, and that seamless blending of fact and fiction is a perfect way to kick off the story.  If for no other reason, watch the movie for all its beautiful, art deco pieces.

And of course a very young Hugh Grant dominates the talented ensemble cast of Four Weddings.  At age twenty two now, the movie is as fresh and funny as ever...well worth a look.

Got a new firepit today... 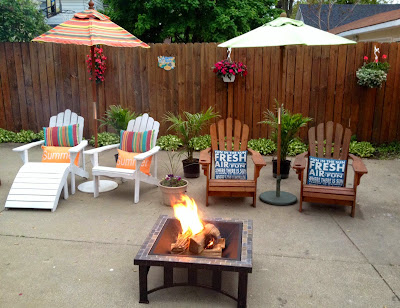 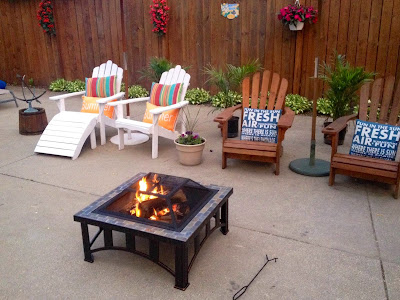 Tonight is "go live" with some new software so I'm over an out for now.