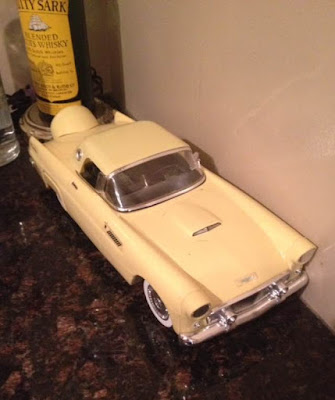 ...Thunderbird Jim Beam Decanter...originally sold in 1986...found this on ebay and it was unopened...the whiskey was 8 years old when it was sold in 1986, which means I got a decanter of 38 year old whiskey,

Before you get too impressed, it was pretty bad...tried a sip or two and it was akin to gasoline...so hated to pour it out, but did so.

Here's the business end of the decanter...the end you pour from: 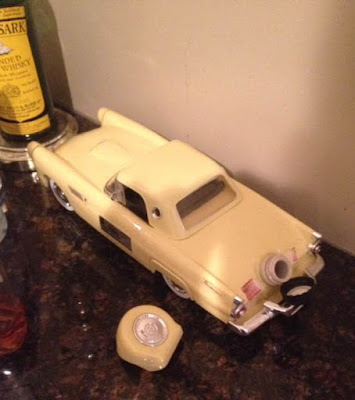 You actually have to turn the car upside down when you pour, else you end up filling the bumper with whiskey. 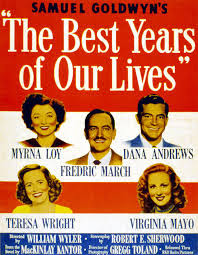 ...a spectacular film from 1946 that won 7 Oscars...what's funny about the ads for it - like the one above - is they leave out the man who won the Oscar for best supporting actor, Harold Russell.

They did so because he was not a professional actor.

The movie is about three returning veterans from the war, just ended, and their individual problems adjusting to civilian life.  This of course reflected the national reality at that time, so it was a "ripped from the headlines" type movie that definitely struck a major chord with audiences.

But Harold Russell really was a returning veteran, and one who had been terribly wounded, losing both hands in an explosion.  He had learned to use hooks in place of his hands, and his only "acting" experience was in a Navy film made for handicapped veterans who were going through rehab like he did. 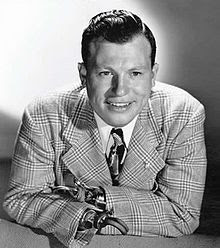 And he has the unique honor of being the only person to win two Oscars for the same role - because the Academy believed he had no chance to win the competitive Oscar for Best Supporting Actor, so they created a special Oscar for him for being an inspiration to handicapped veterans everywhere.

Then much to their surprise - and perhaps chagrin - he did in fact win for Best Supporting Actor, and it was well deserved.

If you don't cry more than once during this movie, you need to check your pulse because your heart is probably missing in action.

Decent weather and unseasonably warm the last couple of days so I drove Mr. T both days...much fun.

Also making pretty good progress on book 2 of the Papa's Model T young readers series...so far I'm liking these books and am hoping for some feedback from my target audience soon.