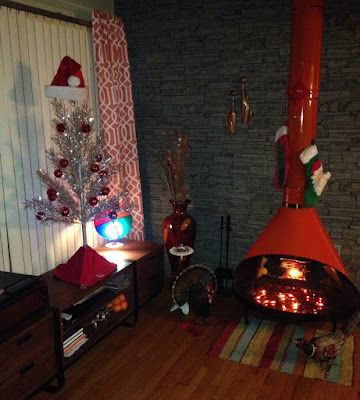 ...the holidays...we've got some Thanksgiving leftovers (turkey and pheasant...delicious...) mixed in for good measure with fresh Christmas 2016 delicacies...gotta love the original aluminum Christmas tree and color wheel.  And don't forget the Santa hat tree topper...

No need to panic, Christmas fanatics...this diminutive four foot set up is not our main Christmas tree...
...the nine foot tree will be set up in the dining room this year...this one is in the living room mainly because the stone wall put the finishing touches on what was already a predominantly mid century modern look and feel.

I have three other aluminum trees, all six footers...could have used one of those, but to do so we'd have to move the credenza out of the room.

And while we could eventually jump through enough (hula) hoops to make that happen, I have a confession to make:

I'm just not that into the holidays this year.
There.  I said it.

There are lots of reasons for that, none of which will be discussed here (for inappropriate "too much information" posts you need to head on over to fakebook).

The day before Cyber Monday, and all is not well at work at the moment...system issues that started on Saturday...have nailed down a probable contributor and will deal with it today.  We need systems to be stable and running efficiently to weather the storm that's about to be unleashed.
Ok, I think that should just about do it for extreme facial close ups.

Not much else shaking in my world at the moment...both my teams lost yesterday...Michigan gift wrapped a double overtime win for the undeserving buckeyes of ohio state...and Menominee got their butts whipped in fine fashion by a very good West Catholic team in the D5 state championship game.

That's four in a row for West Catholic...the beginnings of a dynasty.

But that game could have been very different had Menominee not insisted on shooting themselves in the foot early on with some key unforced errors.  They were very competitive early and were driving on the WC defense easily.

But unforced turnovers spelled their doom, and once Big Mo' picks a side it can get ugly in a hurry...and so it did.  Better luck next year.

And by the by...Menominee doesn't really run the Carlisle formation:

They rarely showed the unbalanced line pictured above.  Rather theirs is a blend of single wing backfield formations with a balanced line set.

Sorry; the tactician in me is showing.  Either way I was generally ticked off Saturday afternoon since both my horses pulled up lame in the big race.

Oh, here's that 9 footer in the dining room:
Did I mention that it doesn't really matter if I'm excited about Christmas this year?  Karen is, so the house is undergoing the usual transformation, to wit:
Guess that's about it for this edition of the Wild_Hare Atomic Monster Cafe...thank you for dining with us today and we hope to see you again very soon.