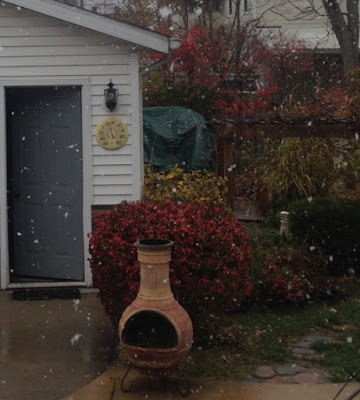 ...Snowflakes...and I'm so excited I could spit.

But I won't because spitting is a nasty habit; so sayeth my mom back in the day.

Even so, I'm not happy about this development, though we all knew it was coming: 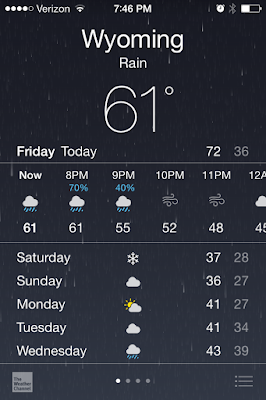 It was 61 degrees and rainy last night, forecast to be 28 degrees and snowing this morning.  As they say 'round these parts, if you don't like the weather just wait a minute and it will change...and so it did.

I guess Kitty knew what was coming, too, bc she snuggled up in front of one of the fireplaces for warmth: 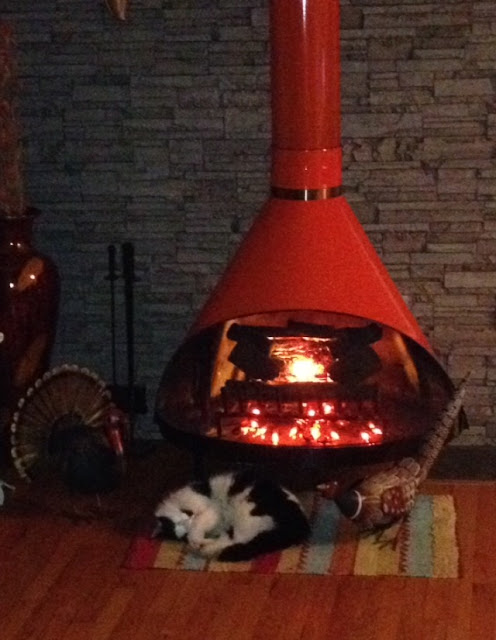 Of course, it might have been wiser to pick the one that actually produces heat: 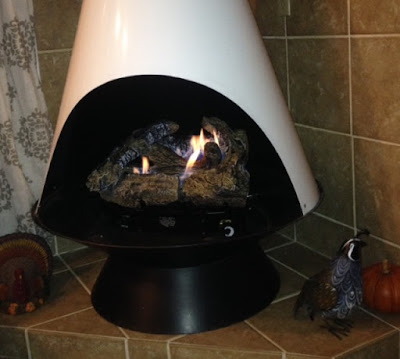 No one ever accused Kitty of being a genius.

Apropos of the season, a heartfelt Thank You to those who have purchased Papa's Model T books from the Atomic Monster Cafe recently.

I sincerely appreciate your interest and would love to hear from you.  All honest feedback, positive or negative, is welcomed.

Today my favorite high school football team, Menominee, is playing in the semi-finals against Frankenmuth.  Love the single wing offense they run...

...and am hoping they cruise into the state championship game next weekend. 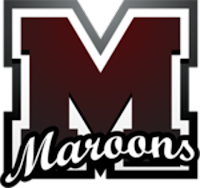 Today is the 153rd anniversary of Lincoln's Gettysburg Address.  It has been well said that Lincoln captured in four minutes the essence and solemnity of the occasion that Edward Everett, featured speaker and famous orator, only skimmed in two solid hours of non stop bloviating.

Lincoln's 272 words stand immortalized in concise greatness, whereas Everett's 13,600+ words of bloated rhetoric are rarely read and largely forgotten.  Yet another instance where excess was confused with significance.

Brevity is not just the soul of wit, it is often the purveyor of brilliance.

Four score and seven years ago our fathers brought forth on this continent, a new nation, conceived in Liberty, and dedicated to the proposition that all men are created equal.

Now we are engaged in a great civil war, testing whether that nation, or any nation so conceived and so dedicated, can long endure. We are met on a great battle-field of that war. We have come to dedicate a portion of that field, as a final resting place for those who here gave their lives that that nation might live. It is altogether fitting and proper that we should do this.

But, in a larger sense, we can not dedicate -- we can not consecrate -- we can not hallow -- this ground. The brave men, living and dead, who struggled here, have consecrated it, far above our poor power to add or detract. The world will little note, nor long remember what we say here, but it can never forget what they did here. It is for us the living, rather, to be dedicated here to the unfinished work which they who fought here have thus far so nobly advanced.

It is rather for us to be here dedicated to the great task remaining before us -- that from these honored dead we take increased devotion to that cause for which they gave the last full measure of devotion -- that we here highly resolve that these dead shall not have died in vain -- that this nation, under God, shall have a new birth of freedom -- and that government of the people, by the people, for the people, shall not perish from the earth.