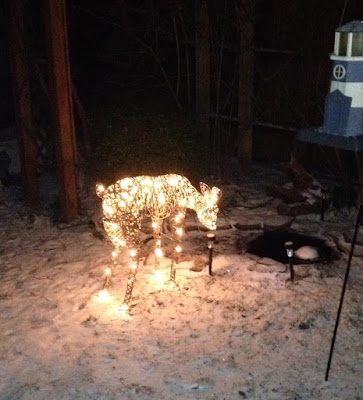 The last vestige of our holiday decorations.  Don't know about you but the holidays seem like a year ago already, and it's only been a month.  Funny how different that time of year is from every other time.

For my part I'm definitely done with winter and it can be summer starting tomorrow...

Sadly, that ain't gonna happen anytime soon.  I do miss the sunshine in this dark and dreary winter we're having.  Just looked outside and it's snowing again.  O boy.

One thing about winter time...we watch more movies on the weekends.

This time we queued up "The Girl On The Train" and "The USS Indianapolis"...both well done and interesting, but both fairly depressing.

Indianapolis was the more interesting of the two for me, telling as it does the story of the ill fated heavy cruiser's return voyage after delivering the A-bomb. 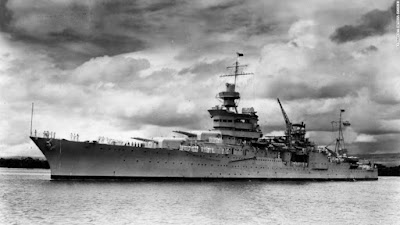 Since it was a top secret mission, it had delivered the bomb solo, without any escorts to protect it from Japanese subs.  Once the bomb was delivered, Captain McVay requested an escort on his return trip, but his request was denied.

Further, reports that were known to naval authorities of Japanese subs in his path were withheld from Captain McVay.  In essence they sent him off on a doomsday mission, with sadly predictable results

His ship was sunk by a Japanese sub on a Sunday night around 11 pm, but because of their top secret status the survivors were not discovered until Thursday, floating in the oil-slicked ocean, barely clinging to life.

Almost 1200 men were on board at the time of the attack.  12 minutes later the USS Indianapolis was gone, 300 men had died, and the 900 survivors went into the drink.

Of those, only slightly more than 300 made it out of the water alive.  Many of the 900 died from their wounds, exposure to the broiling sun and thirst...but the worst of their nightmare involved the hundreds of men eaten alive by sharks during their 4 day ordeal. 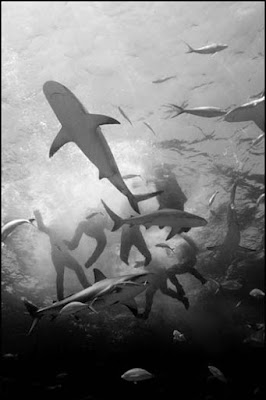 This incident was famously mentioned in the 1975 blockbuster Jaws but overall surprisingly little about this tragedy has been widely disseminated.

Captain McVay was railroaded in December of 1945 during a sham court martial; he committed suicide in 1968.  His name was officially cleared in the fall of 2000, 50+ years after the tragedy.

Nicolas Cage did a good job portraying the hapless Captain, and thankfully the movie refrains from excessive blood and gore.  The emphasis is NOT on the shark attacks, though of course they're a gruesome part of the story.

Not sure I'd watch it again, but am glad we did so once.

And on that happy note...

Email ThisBlogThis!Share to TwitterShare to FacebookShare to Pinterest
Labels: captain mcvay, the girl on the train, uss indianapolis