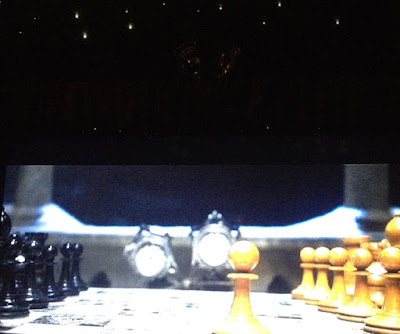 What?  You thought I'd post something about the Stupid Bowl on Super Bowl Sunday?  Not on your life.  Overhyped, overpaid millionaire crybabies competing in a kids game...file that under "couldn't care less".

Not that I'm a big chess player, either...don't have the patience, temperament, or - let's be brutally honest here - IQ points to be great at that game.

But it always interested me...the strategy, the beauty of the pieces, the complexities, the creativity involved in this thinly disguised metaphor for war.

Anyone recognize the picture above?  It's from the second Sherlock Holmes movie, Game of Shadows, at the end of the movie.

It's 1891 and Sherlock, portrayed absolutely brilliantly and eccentrically by Robert Downey, Jr, is playing a 5 minute blitz game against the evil mastermind Professor Moriarty, portrayed convincingly by Jared Harris.

It's winter in Switzerland, and they're playing at night, outdoors.  A lovely, elegant setting for a deadly conflict that ends with both of them plunging a thousand feet to what must be certain death.

Another view of the chess board: 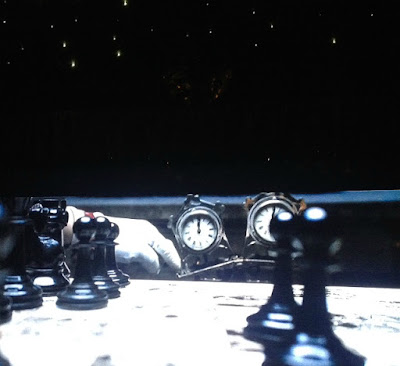 Love the starlit night...except those aren't in the movie...those are our twinkle lights in the theater room.  If you look carefully you'll see just below the lights, just above the board, the faint outline of our two drama masks, hung just above the TV.  They're a little easier to spot in the first picture.

This has been a bit of a do nothin' weekend...didn't make a lot of progress on anything, either at work or at home.

Not that I don't have plenty to do; the good Lord in heaven knows I do...but writing on "Man" was slow and painful, and work was sidetracked with system problems Friday night.

Saturday we got some shopping done, then watched the aforementioned movie.  Today I did some work related things but not enough of them, flailed away on my book for a bit, and still need to get a workout done.

Did spy a cardinal at the feeder this morning... 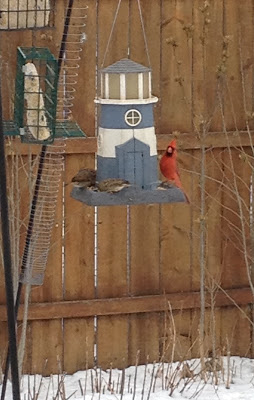 They are beautiful birds.

Been kicking around the idea of buying some hickory shaft golf clubs, just because they're vintage.  Used to flog back in the day, mostly because my dad was a golfer and it was one of the few ways I had to spend any time with him.

My general feeling has been golf is a good way to ruin an otherwise pleasant stroll through the country, but I don't know...I've got a son who likes to golf and I never see him...this might be a way to spend an occasional Saturday morning with him.

Plus, I love the names of the old clubs: 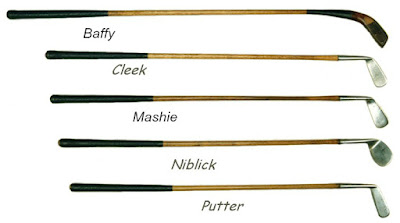 One of the fun chapters in my book is going to be called Of Baffy's, Cleeks, Mashies and Niblicks.