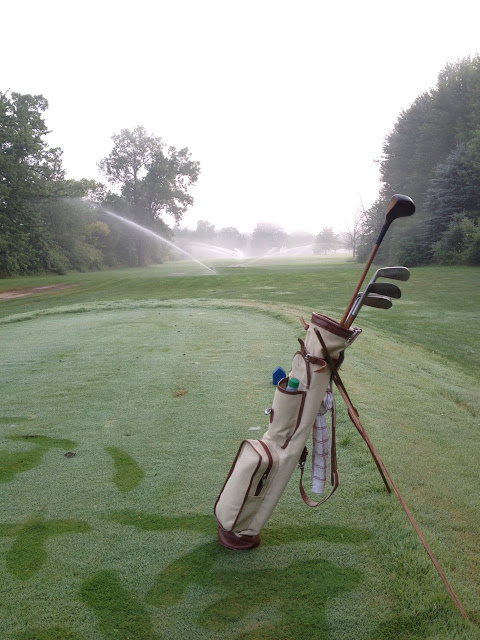 ...I should have taken...sprinklers were still on when I arrived for a round of golf...instead of waiting as I did, it would have been the better part of wisdom - and certainly better for my mental health - to abandon ship right then.

But no...I had to hang around and then repeatedly illustrate that everything I thought I knew about how to properly strike a golf ball is in fact rubbish.  Or else my execution of it was garbage.

Either way, this was a wasted hour and fifteen minutes of pointless and frustrating activity.  If you subtract the cost of the golf balls I donated to their water hazards and fairway rough, they only owed me $2.38 when I put the finishing touches on this debacle.

To my faux surprise, they don't do that but instead expected me to remit the full amount as payment.

And why not?  That was the coup de grace on my self-inflicted humiliation at the hands of the golf gods.

Since analysis is what I do, I've already figured out a lot of what I was doing wrong and practiced doing it right.

It's so simple hitting plastic whiffle golf balls in my backyard.  I can't wait to muck it up in real life next week.

When I do, I'll be playing out of my new "Sunday bag": 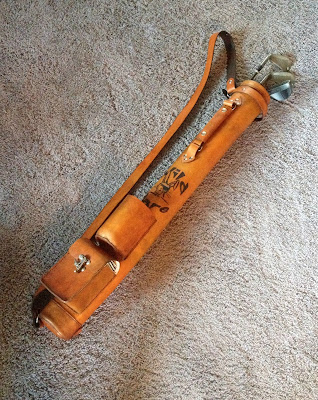 Crafted by Mike Armstong of Atrix Leather on Etsy, it's a beautiful leather bag designed to hold only 3 or 4 clubs...perfect for what I'm doing with hickory golf right now.

The above is a pic Mike sent to me; when I get it this week I'll put my cleek, mashie, niblick and putter in it for another photo shoot...those are what I'll be golfing with for awhile.

Note the "Wild Hare" logo on the bag.  Couldn't be happier with Mike's work...he's not just a talented artisan, he's also a good guy; great to deal with.  Check him out on Etsy for your custom leather needs...you'll be glad you did.

And speaking of craftsmen, received an unexpected gift in the mail from Bob Adams of Ronson Repair   Bob's the guy who helped me put together my Ronson lighter collection, beautiful pieces from the 1930's art deco era.

He knows Karen and I are mid century modern fans, and has heard me whining about all the issues related to our move into our new digs...so to shut me up (temporarily) he sent along this gorgeous mid century modern Dansk Cheese Knife: 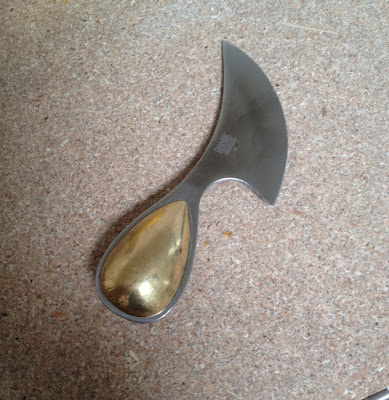 Since it's a cheese knife, maybe he was making an oblique reference to "whine and cheese"?

Either way it's beautiful and substantial, with a pleasingly heavy feel in the palm of your hand.  Could easily double as a self defense system in the event of an emergency (as could my bakelite phones), but only if I can't get to my Mossberg 500 pistol grip shotgun.

And speaking of Bob's assistance with my Ronson collection, here's something in our living room display cabinet: 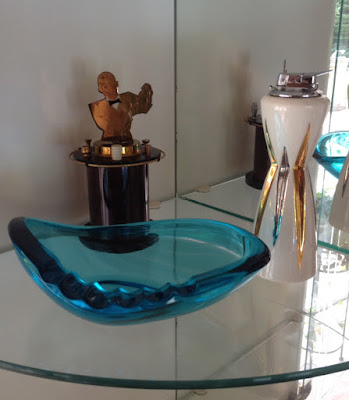 Both the lighter on the right and the bartender cigarette holder behind the ash tray were obtained from / repaired by Bob.  (Found the ash tray in an antique shop in Palm Springs.)

The bartender piece is not Ronson, though on ebay it's often listed as such.  Got into a brief but nasty debate with a clueless / dishonest seller who listed one as a Ronson piece.  I contacted them and politely pointed out those were not made by Ronson, and if you turned it upside down you'd see that right away.

O boy...that did not go well.  After an insulting reply from the uneducated idiot, I ended up telling them if ignorance and arrogance were pennies, they'd be a billionaire.  For some reason I didn't hear back from them.  Odd.

Progress continues on the house reno... 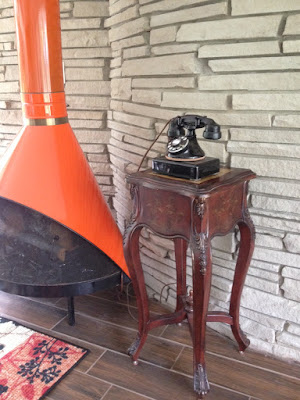 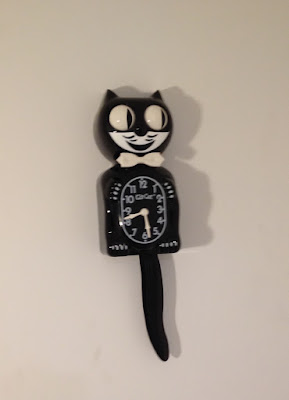 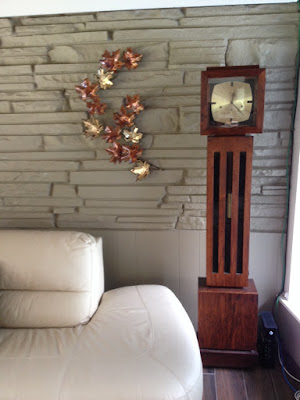 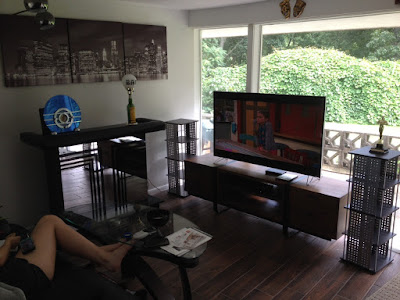 ...but not fast enough to suit either Karen or me.  Really don't want the summer to disappear, but that's tempered by the realization it will probably be a couple of months before we finally have this place "complete" (a figurative and temporal term to be sure).

In the meantime, as June Carter opined musically, time's a wastin'...