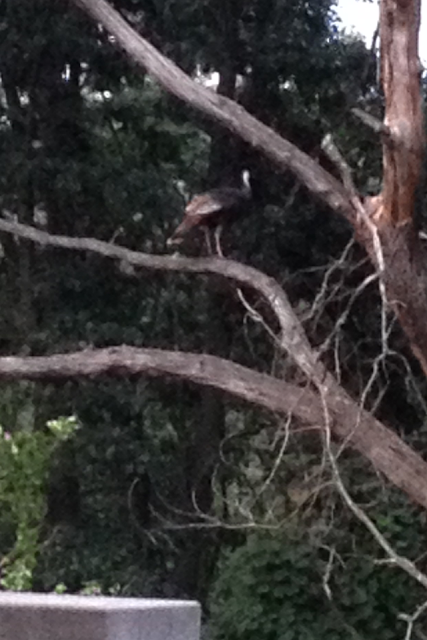 ...in the treetops...reminds me of the old WKRP in Cincinnati episode where they dropped turkeys from a helicopter to people in the parking lot.

It turned into chaos as the turkeys fell and hit the ground "like sacks of wet cement" and bombed the hapless patrons below.

Included was an hilarious sendup of the famous Hindenburg broadcast when Les Nessman exclaimed "Oh the humanity!" as people ran for their lives from the turkey bombs exploding around them. 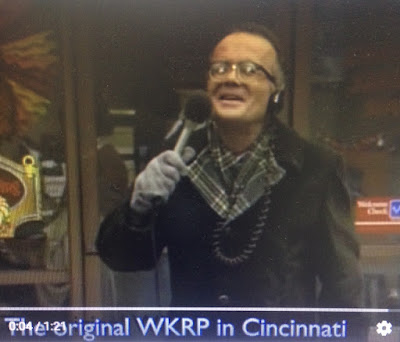 And finally the shell shocked station manager exclaims, "As God is my witness, I thought turkeys could fly!"

Well, I'm here to report they can...sort of...they leap into the air and fly up into a tree in our backyard on a regular basis...of course the babies seem mostly earthbound at the moment... 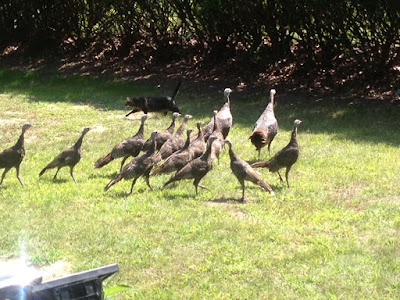 ...they trail around after the mother hen as she leads her brood on feeding excursions.  That's Smokey the cat in the top of the photo...they ended up following him for awhile like he was the Pied Piper until he slipped into the woods and made his getaway.

Karen was painting the walls in our basement and sent me this photo... 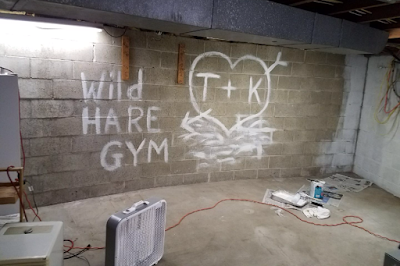 I told her it's perfect, leave it just like that...but alas she painted it all white eventually.  I do now have my Total Gym and bike down there, along with a bunch of shelves stacked with boxes and etc.  It's been a couple of months since I did a decent workout, but I am determined today's the day I will start again.

But first, this morning I presented myself as a human sacrifice to assuage the anger of the golf gods, and man were they ever pissed off at me.  At least that's my theory...there's no way I could be as bad as I did today so there must be some other explanation... 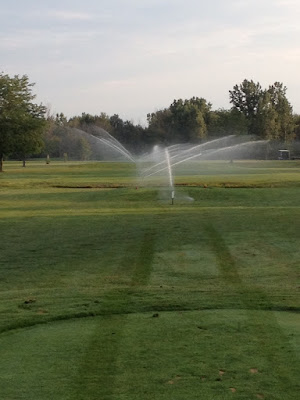 That's the view from the 4th tee where I waited 45 minutes for them to turn off the sprinklers, which in days gone by they assured me were all done by 7:30...more like 8:30 today.  When they did finally turn them off I promptly dropped my tee shot in the drink and so it went today.

By the 9th hole I was so disgusted with my performance I was ready to throw myself in front of a bus, but today even that would probably have taken me 3 or 4 tries to get it right.

In the 1975 Western Open golfer Lee Trevino was struck by lightning.  Later he said he should have been swinging his 1 iron and when asked why he replied, "Because not even God can hit a 1 iron."

Today I was trying once again to use my cleek iron, which is basically equivalent to a 1 iron.  That is not the sum total of my issues, but it certainly contributed to my woes.  I should have just left it in the bag but no...I was determined to get it right, which of course I never did.

And once I'm struggling in one area it seems to bleed over into every area of my game.

Oh well...got home, removed the offending club, and spent an hour hitting whiffle golf balls with my mid iron, mashie and niblick in my backyard, trying to regain some semblance of competence.

And just so we're clear, golf clubs should have names, not numbers, and have shafts made of hickory, not super springium titanium carbonium or whatever it is they make them from today.

Finally bought a pump for the 300 pound fountain in front of our home... 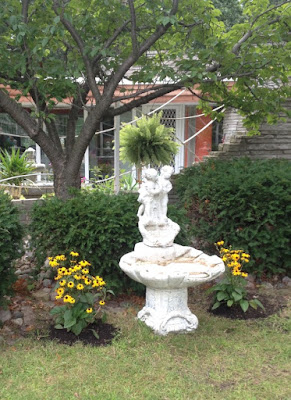 Love the black eyed susans Karen planted on either side.

After working around the yard most of the day Karen and I relaxed by the fire on the patio outside the living room... 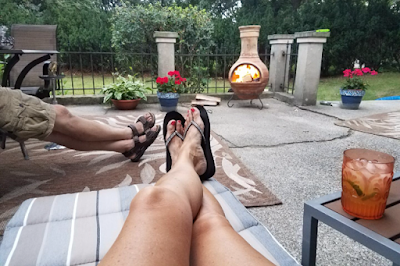 That chiminea actually broke in two pieces when we were moving it from the house in Wyoming...the top basically just lifted right off the bottom, about half way up the opening...so we bought some fire brick caulk and "glued" it back together, then found some rustoleum paint made for painting outdoor fireplaces to cover the caulk line...worked very well and we enjoyed relaxing for an hour before moving the party indoors. 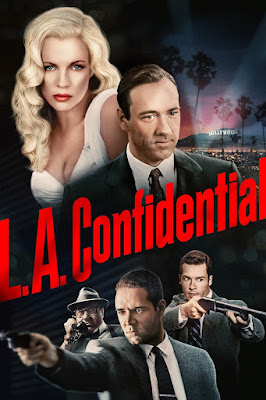 ...great movie...Kim Basinger won an Oscar for that movie, but it should have gone to Russell Crowe...he's dynamite as officer Bud White and steals every scene he's in. 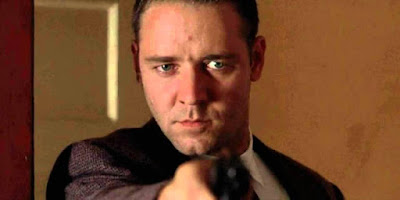 But now it's time to attack the garage and all the flotsam and jetsam harbored therein.  Karen is motivated to clean out enough to get her car inside.