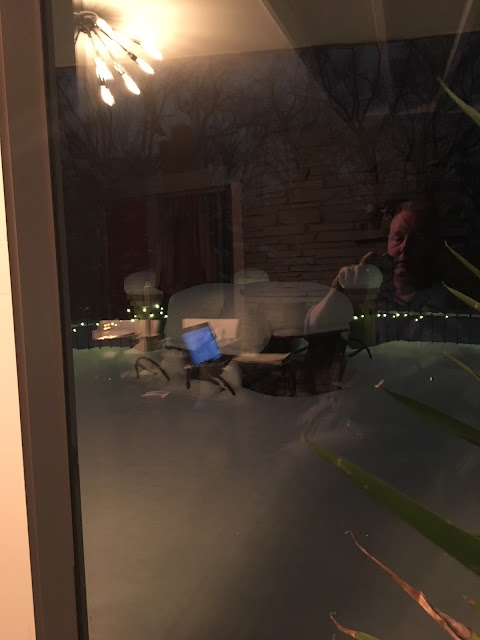 ...and unsettled...been awake since 3:15 for some unknown reason, so finally decided to stop tossing and turning and get up.  Checked on work, brewed some coffee, read my email...now what?

With all those midcentury modern fans clamoring for the latest and greatest, why delay the invevitable?  Time for another edition of the Atomic Monster Cafe.

Our beloved cast of characters remains the same... 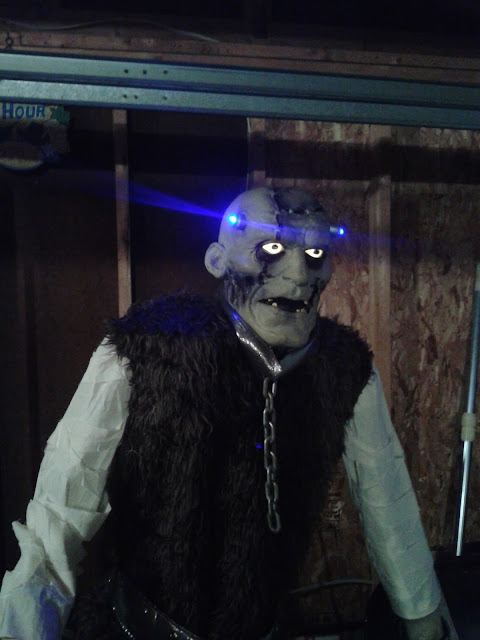 ...our publisher who maintains our consistently high standards of excellence and from whom our virtual cafe takes its name... 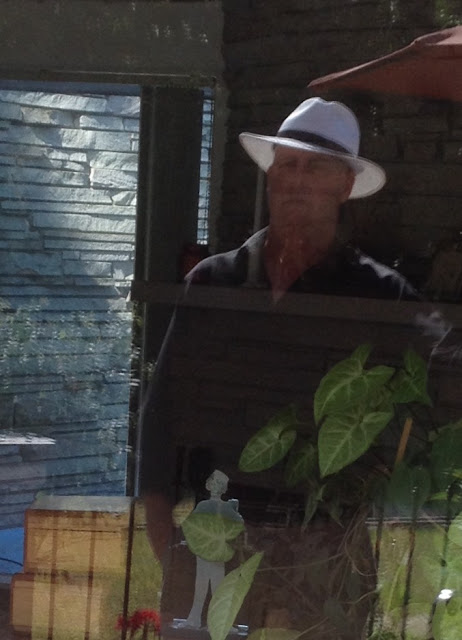 ...our featured writer who does as little useful work as possible during any 24 hour period, drifting instead on a sea of dissipation, drinking whiskey, smoking cigars and taking pointless selfies... 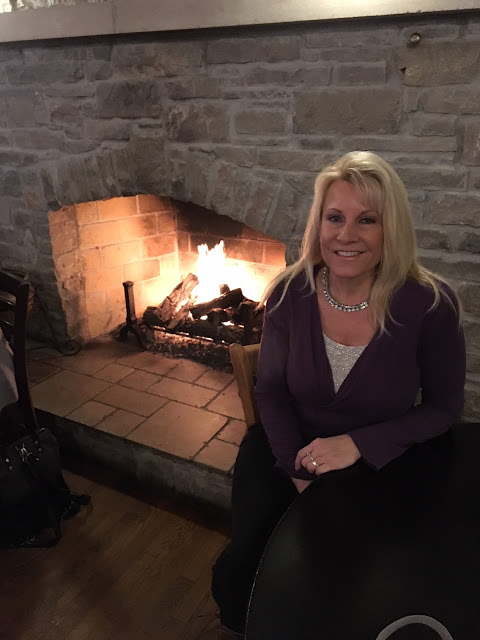 ...and our beautiful femme fatale who pretty much singlehandedly keeps the wheels on this and every other endeavor with which she becomes involved, working tirelessly to undo whatever damage our featured writer consistently inflicts on his surrounding environs.

So, as my 11th grade history teacher from New Jersey used to intone, "widdout foida adoo" (really; that's how he said it), The Atomic Monster Cafe!

Yeah...sorry, I got nothin' today.  I mean other than that snazzy intro, there's just not much happening here in the dead of winter.

I did recently buy a rotary phone from the Ericofon website... 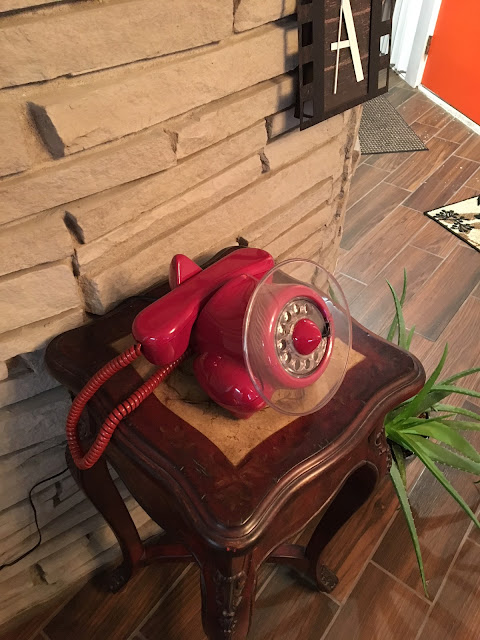 That's an "Alexander Graham Plane" phone made by Northern Telecom in the 80's. 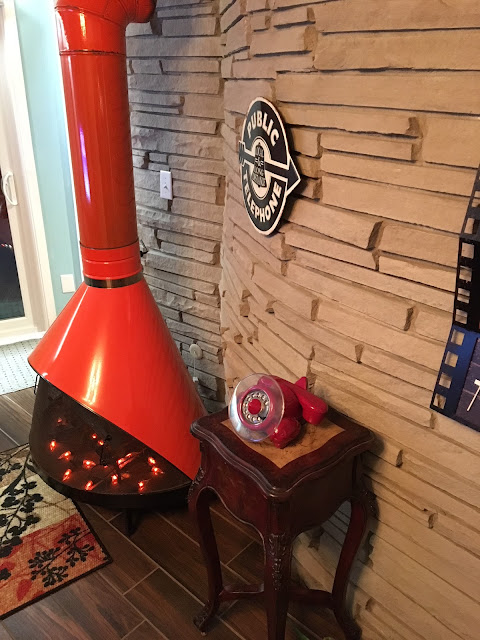 I really shouldn't be allowed to play with sharp things or credit cards.

Moved my candlestick phone to a display shelf in the living room... 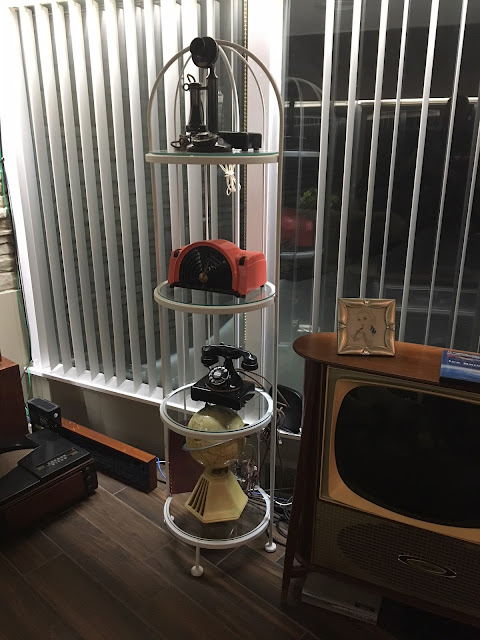 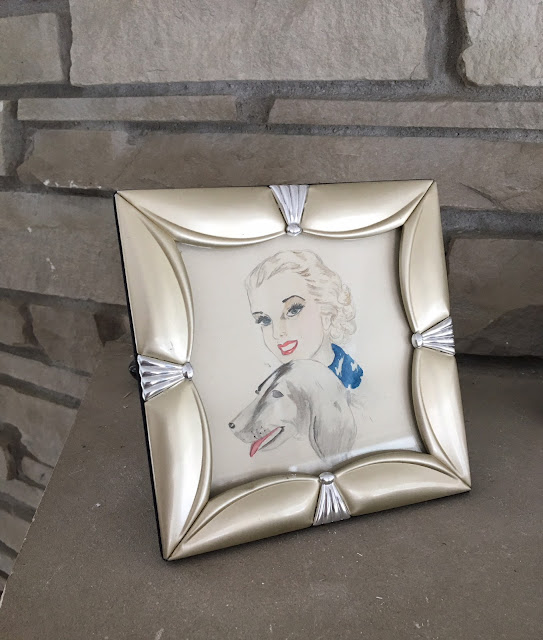 As the very first pic at the top of this entry illustrates, we got hammered with more snow yesterday. 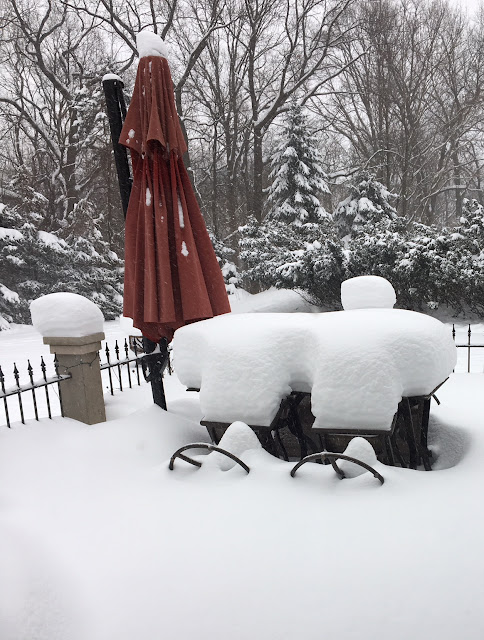 Two weeks ago I walked 9 holes with my hickories on a sunny, 45 degree afternoon...but once again we've been plunged into the depths of winter.  Ah February!  How we love thee!

Karen did get outside and create an Art Prize entry from all the snow piled on our patio wall: 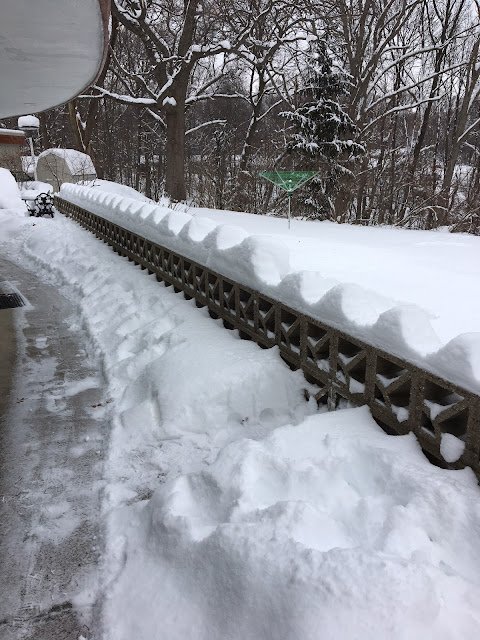 Because of all the snow I worked from home yesterday...so Karen and I enjoyed lunch at Curragh's again, a local Irish pub... 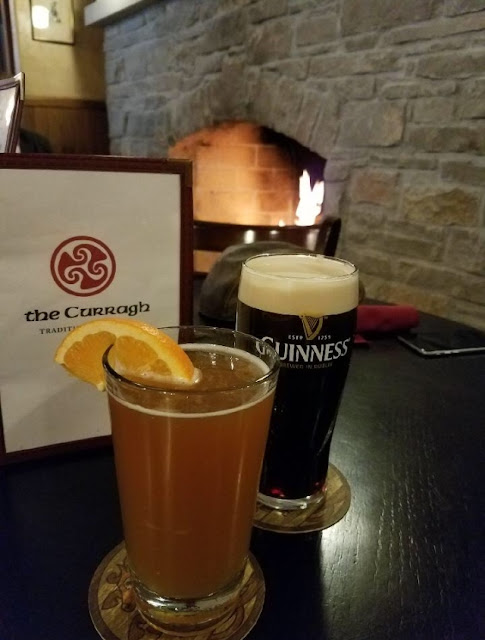 ...yes, we had actual food to go with our Blue Moon and Guinness...both on tap there by the way...excellent...Karen had fish and chips, decidedly English fare, while I chose the Traditional Irish Breakfast, complete with Irish bangers and rashers and some black and white pudding.

You should eat the black and white pudding before you look up what it's made from.  Dee-lish.

This put us in a distinctly ethnic mindset, so last night we enjoyed The Englishman Who Went Up A Hill But Came Down A Mountain, a quiet little gem from 1995 starring Hugh Grant, Tara Fitzgerald and Colm Meaney. 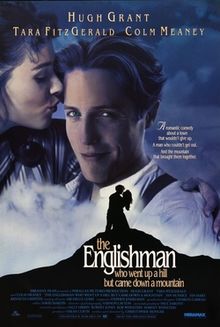 Set in 1917 in Wales, it's the story of two English cartographers who are surveying and mapping the countryside.  They come to a little village whose main claim to fame is they lie in the shadow of Wales' first mountain, the unpronounceable Ffynnon Garw.

Alas, to be labeled an actual "mountain" on an English map, it must be at least 1,000 feet high, and the official measurement records it at 16 feet under: 984 feet.

The villagers are appalled that their mountain will be listed as only a hill on an English map, so they swing into action.

What follows is a good natured stroll through small town maneuverings to keep the sophisticated English gentlemen there in the village until the summit of their hill can be raised twenty feet and then remeasured by the reluctant cartographers.

Throw in an abundance of understated English humor, a small romance for leading man Hugh Grant and even a bit of drama related to the Great War, and you have a fine and entertaining film.

It won't change your life, but will make you wish you were a Welshman.

Email ThisBlogThis!Share to TwitterShare to FacebookShare to Pinterest
Labels: alexander graham plane phone, curragh's irish pub, femme fatale, the englishman that went up a hill but came down a mountain