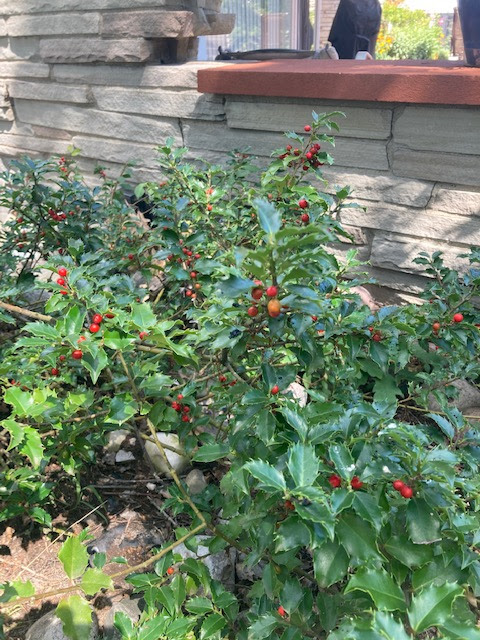 ...it cannot possibly be time for mistletoe and holly.
And yet, our holly appears to be in full bloom with nice red berries.
Can the jolly old elf himself be far behind? 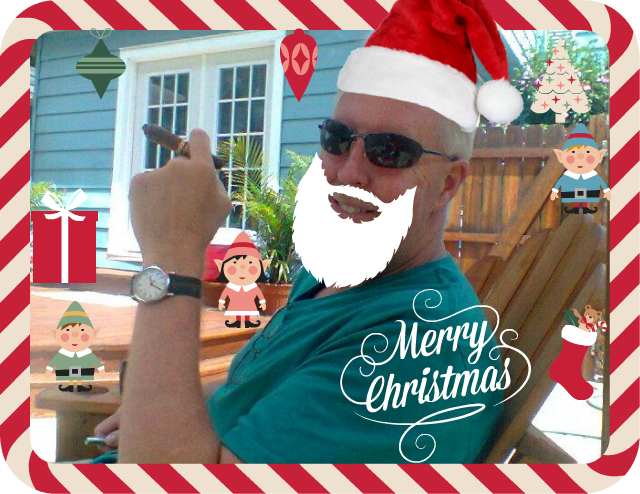 I certainly hope so.

Life at the lake up north continues for Larry this holiday weekend... 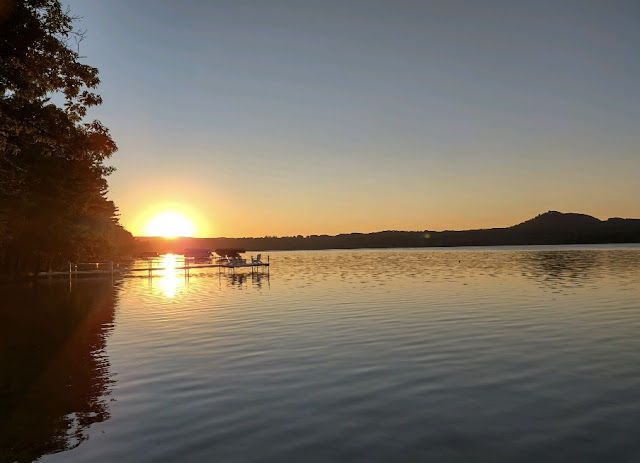 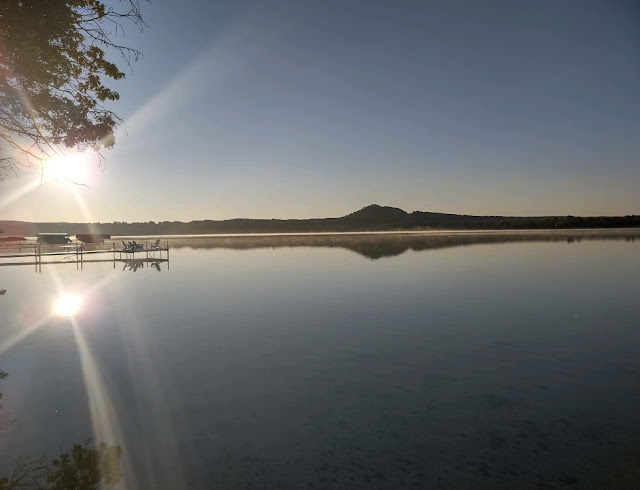 In the meantime Chip continues training Larry to feed him on command... 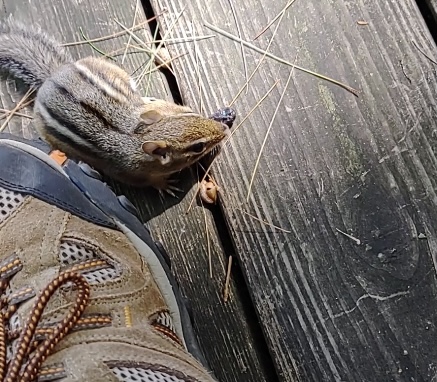 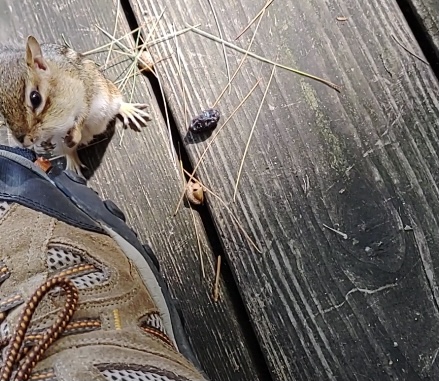 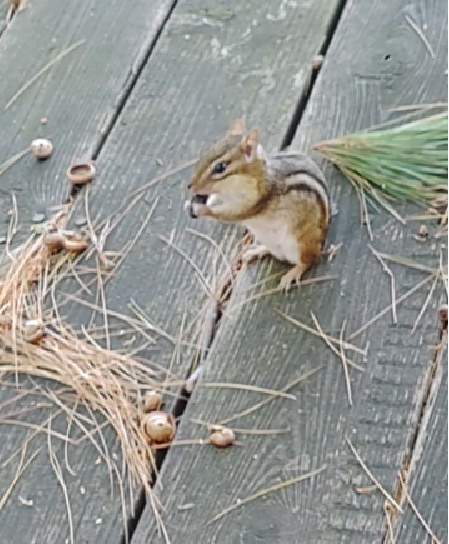 ...and it’s rewarding in the long run. 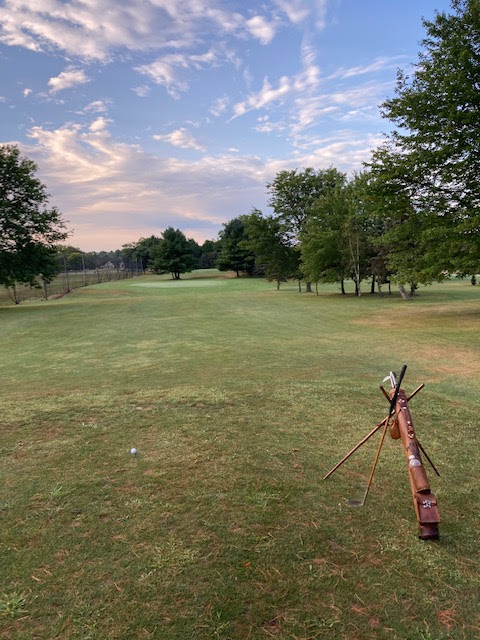 ...it's to the links we go...though for the life of me, I can't think why I bothered today. 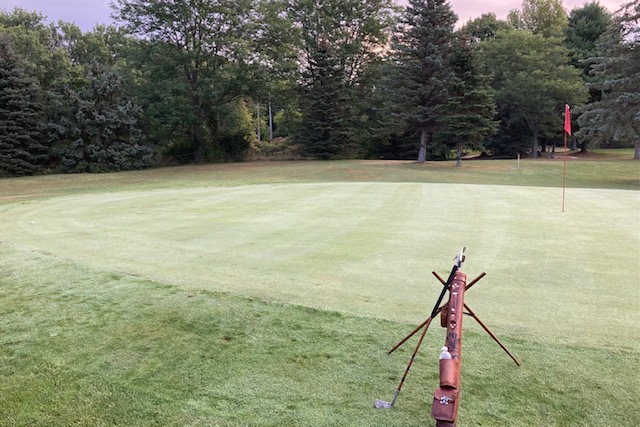 The change in golf balls - from gutta perchas to the kind used during the "classic" hickory golf era from 1905 through 1930 - seemed to wreak more than its share of havoc with my game today. 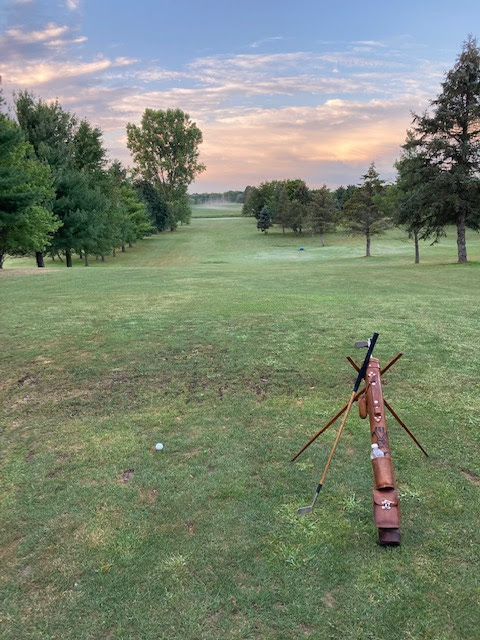 Yes, I *eventually* hit them a little farther - 20 to 30 yards per club - but it took me until the 6th hole to begin to adjust, and I never got the feel of them on the greens... 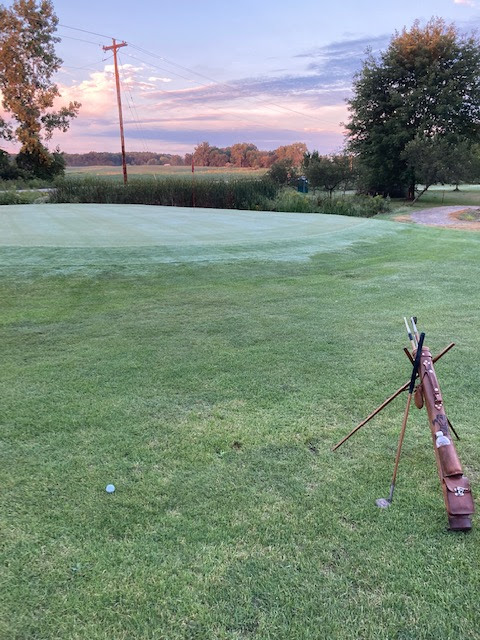 ...so 3 putts were the crap du jour served up on almost every hole.
I'll probably try again on Monday... 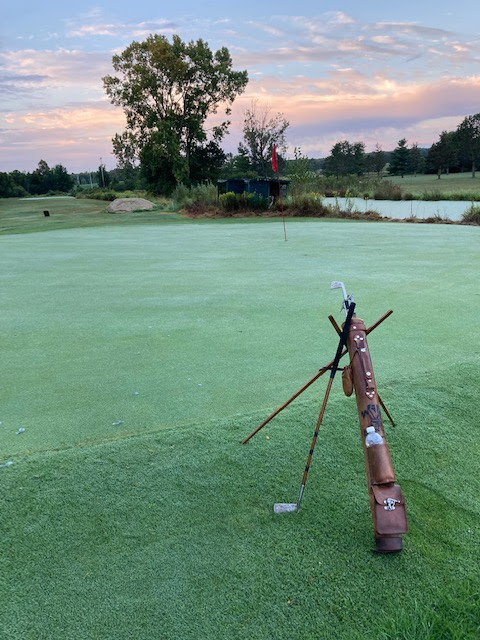 ...but at this point it's tempting to throw in the towel on my little experiment and go back to what I like.
More to come...

In the Liar-in-Chief department... 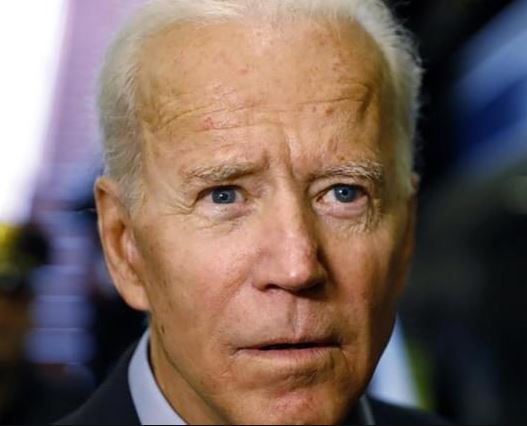 ...our befuddled leader made a loud and angry promise to us, his jaded audience, as he glared at the teleprompter, struggling to read the oversized print scrolling ever so slowly there.
And what was his solemn vow?
Simply this:  we would remain in Afghanistan until every American who wanted to leave was evacuated!
"Nobody left behind" was his somber and constant refrain during the summer.
However, turns out our Shallow Leader also made a promise to our mortal enemies, the Taliban (or as he carefully pronounces it, the "Tah-lee-bon")...that we would be out of Afghanistan forever by August 31st.
Though we owe nothing to bloodthirsty terrorists responsible for the deaths of too many Americans, both of those promises would have been possible with intelligent planning and competent execution.
Sadly, this is the Biden administration where both intelligence and competence are MIA.
Instead of generals focused on military strategy and protecting the United States of America - like George S. Patton during WWII, for example - 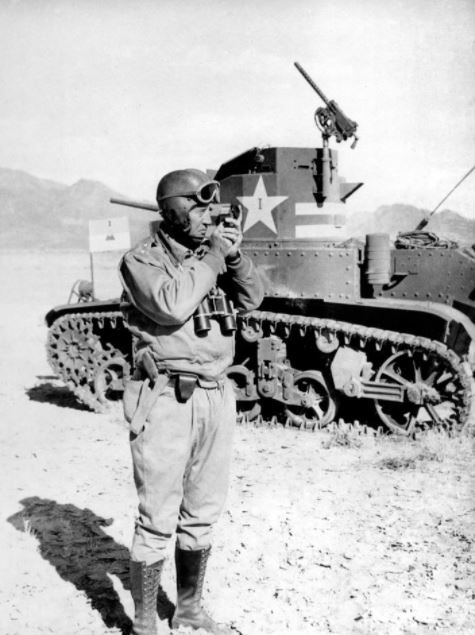 - today we have woke generals hyperventilating over critical race theory and white rage... 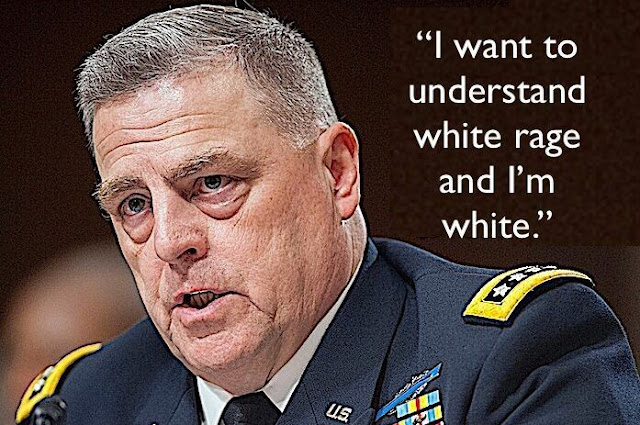 ...like general Mark "It's Not My Fault" Milley, a chair pilot from the Pentagon, who steadfastly maintains there was nothing he nor anyone else saw that would indicate the Afghan army would collapse and the Taliban would overrun the country in 11 days.
Worried his bald-faced lie might not seem credible, he glared up at his audience and doubled down on the absurdly self-incriminating claim:
I repeat:  Nothing! 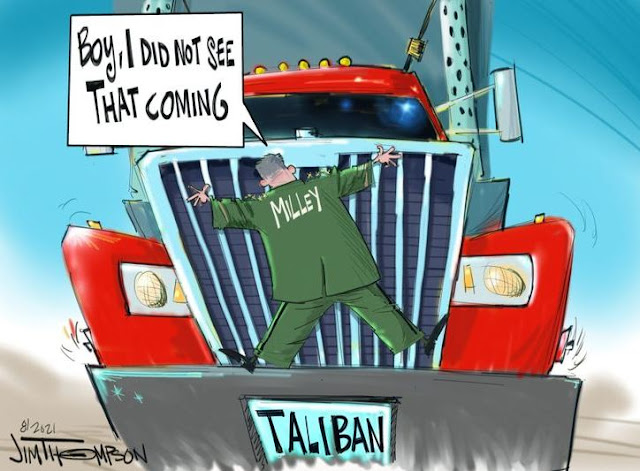 Dim though he is, perhaps he realized admitting he didn't see the obvious coming made him look both stupid and weak, so he tried to implicate everyone in his woke bubble.
A sort of "hey, none of us saw nuthin' and we can't all be that stupid, right?" approach.
Patton would have chewed this joker up and spit him out for the fraud he is.
And so, as the debacle of the Afghanistan withdrawal played out in excruciatingly painful detail before our eyes, it became obvious it was impossible to keep both of China Joe’s promises.
We could either remain until every American was evacuated, or we could cut and run by August 31st to please the “Tah-lee-bon”.
Due to his utter failure of leadership, there was no way we could do both.
So which promise did His Fraudulency keep?
If I may borrow one of his tired cliches, C'mon, man!  Get serious!
Of course he kept his promise to our sworn enemies...
...who have delighted in killing Americans for decades, including 13 service men and women just recently at the Kabul airport.
We did indeed cut and run with our tails between our legs like whipped pups by August 31.
That means, of course, he broke his promise to us, the people he allegedly represents, leaving hundreds and perhaps thousands of Americans stranded behind enemy lines.
Folks, this is what treason looks like.

Not only has he abandoned American citizens to our enemies, he also left behind $90 billion worth of military armaments...vehicles, aircraft, weapons.
If that's not aiding and abetting the enemy, I don't know what is.
I'm neither a pessimist nor an optimist, choosing instead to deal with reality, so here it is:
Humanly speaking, there is no way this ends well.
It's a tragedy with consequences stretching far into the future.
After this unilateral decision to withdraw and the humiliating defeat it precipitated, we've elevated the taliban to a greater position today than when we first engaged them 20 years ago.
We not only handed them a victory as we ran up the white flag of surrender, we also armed them with $90 billion worth of military equipment on our way out the door. 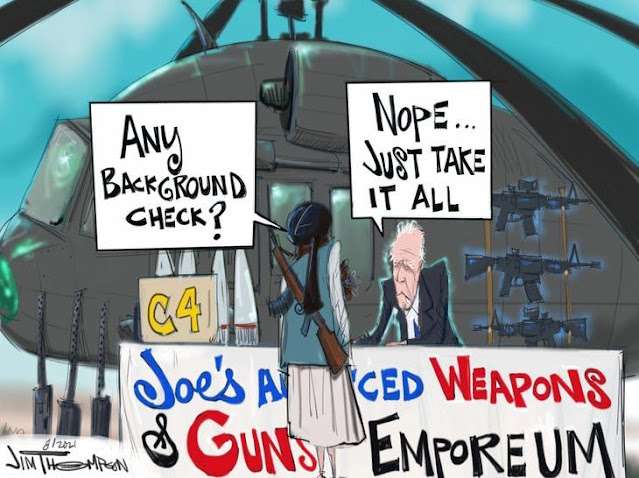 Think about that:  20 years of war and what's the end result?
Our enemies no longer fear us and our allies no longer trust us.
In military jargon, it's FUBAR on steroids.
If you're on praying ground, now's the time to drop to your knees and beseech your heavenly Father for His grace and mercy...for those abandoned to our enemies in Afghanistan, and for the future of our once great country.

Forgive the abrupt transition, but on that sobering note I bid you adieu.
As Summer dances off the stage...

...remember to give thanks your life doesn’t depend on JB keeping his promise...yet.
Many others are not so fortunate.
Hope you're able to enjoy a long and relaxing Labor Day weekend with friends and family.
later, mcm fans...
* Crass Commercialism Corner *