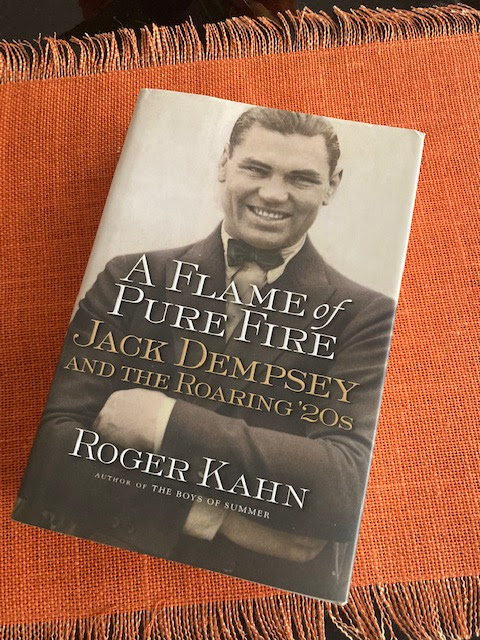 ...only this one's for real...a brilliant biography about the incomparable Jack Dempsey, costarring the Roaring Twenties, by Roger Kahn (author of the baseball classic, The Boys Of Summer). 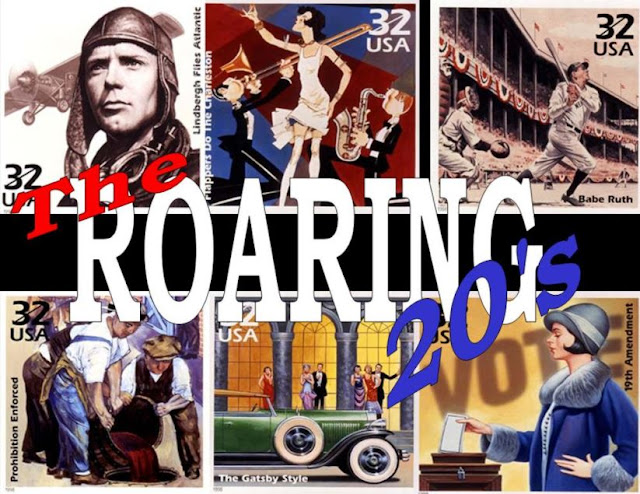 It was an extraordinary age, wedged between two earth shattering events:  WWI, the "war to end all wars" (insert sardonic laugh here) and the stock market crash in October of 1929.

A bust on either end, but oh, what a boom in between!

In a decade that specialized in producing larger than life characters in all walks of life...

...the biggest of them all was Jack Dempsey. 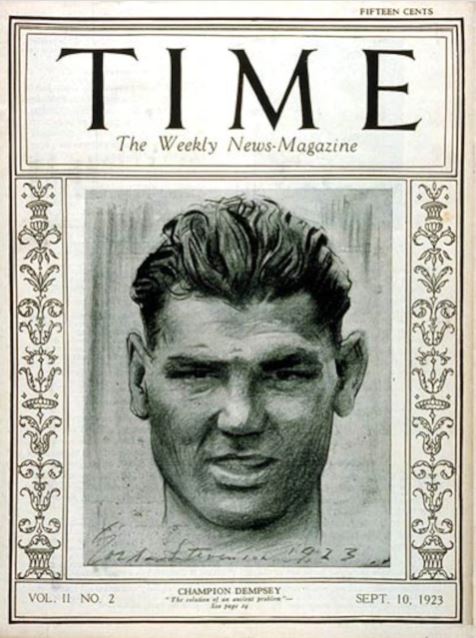 That's not just fanboy speak because at the time he was anything but beloved.

Nasty accusations of ducking service during WWI plagued him, even after being acquitted of draft dodging charges in a sensational trial during February of 1920.

(Years later, after leading his men into battle at Okinawa in 1945 at age 49, he told Roger Kahn:

"People said I was a slacker in WW1 and a hero in WW2.
They were wrong both times.")

He was so completely dominant in the ring, often knocking out his opponent in the first round, many fight fans simply would not cheer for him.

...one sportswriter said, "How can you cheer for Dempsey?  That's like rooting for the guillotine instead of Sydney Carton".

It's worth noting that before this fight, the promoter - worried it would be over before it started - told the champ to "carry Carpentier for a few rounds".

When it came to fighting, Dempsey's creed was simple: the sooner the safer.

"You can get killed fighting in the ring," he told Kahn, "so my goal was to end it as quickly as I could."

Vividly underscoring his assertion was the Dempsey-Firpo fight in September of 1923.

After knocking down the much bigger challenger seven times during the first round, Dempsey himself was knocked completely out of the ring by the inconceivably resilient Firpo:

Unbelievably, Dempsey scrambled back into the ring with help from the reporters upon whom he'd fallen.
Surviving the round but only semi-conscious, he made it back to his corner and his trainer threw a bucket of ice water on him.
"What round was I knocked out?" Dempsey asked.
Pulling him to his feet, the trainer told him, "You weren't!  You slipped, now get out there for round 2!" then pushed him back into the fray.
For a man who barely knew where he was, Dempsey did alright, dispatching Firpo - the Wild Bull of the Pampas - once and for all at :57 seconds of the 2nd round.
After the fight Dempsey was quoted as saying, "Every time I knocked him down, he got back up and still had the killer light in his eyes.  That's what I was trying to put out."

Almost 100 years later it stands as the wildest, most incredible round in heavyweight boxing history - 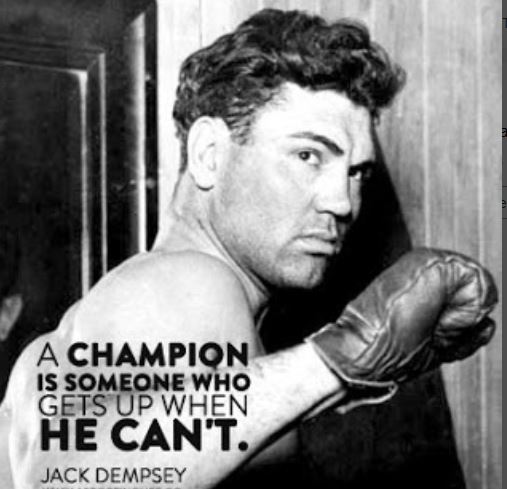 - and a stark reminder of why Dempsey lived by his "the sooner the safer" motto.

Roger Kahn does an outstanding job of chronicling this amazing man - from his origins of fighting in the mining camps and riding the rails ("I was a hobo, but never a bum")...

...along his journey through the Roaring Twenties and beyond, to his sad but dignified ending at age 87 as "The Champ" - 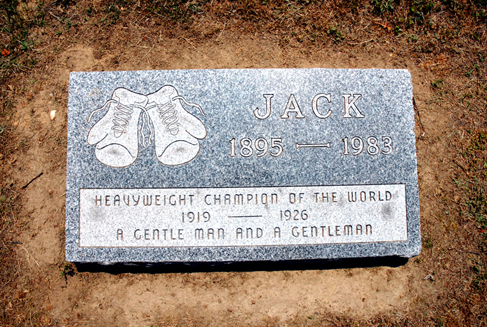 - finally appreciated for his talent and achievements by all who knew him.

Along the way we learn about the incredible decade he dominated as the most famous, highest paid athlete and star... 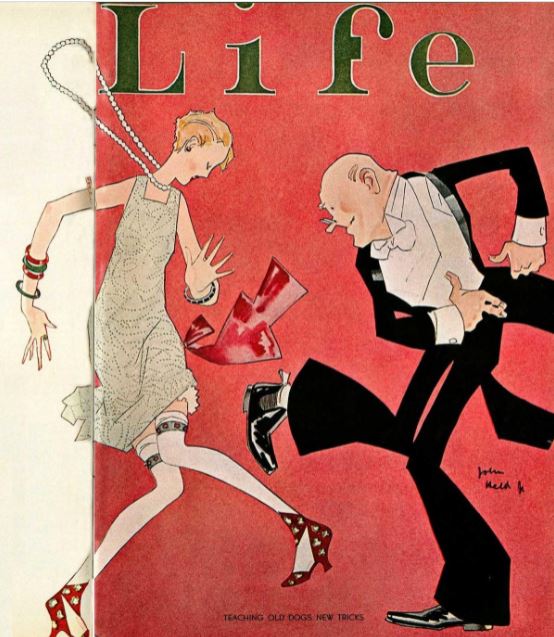 ...the colorful characters, the politics, the gangsters, the business climate, the entertainment industry, even Dempsey’s acceptance by European royalty.

And Kahn does all this with the deepest respect, even love, for his subject.

The 32 year old Dempsey was cheated out of regaining his title by a mob backed, crooked referee in 1927...

...in the infamous - and still controversial - "Long Count" fight.
Reviewing the film, Kahn is outraged.
Dempsey's response?
"I never alibi."
You owe it to yourself to read this book.
Kahn's writing is clever, informative, descriptive and you'll be both educated and entertained.
He always writes at you, not above you.
Where else will you find adjectives like Rabelaisian  and  belletristic   without the writer seeming stuffy and ostentatious?
C'mon, you don't want to be an ignoramus, do you?
That's not a rhetorical question.

It's in the teens today, so I suggest you bundle up for your frozen trek through the Parting Shots department.

(You thought it would be heated?  Sorry, but thanks to Bidenflation and Granola...

...natural gas is 40% more expensive this year...zip up your parka and start hoofin' it.)

Ever so slowly, we inch our way toward Spring... 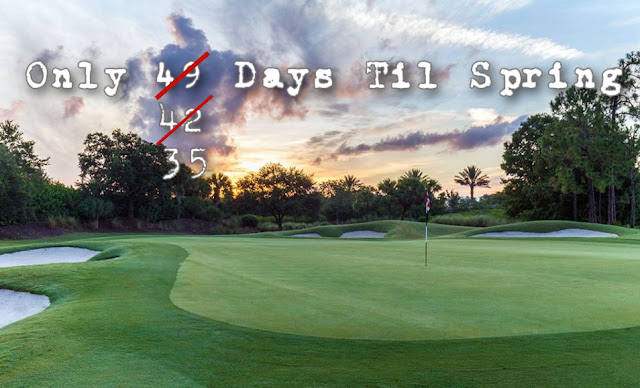 "For lo, the winter is past, the rain is over and gone.
The flowers appear on the earth, the time of the singing of birds is come..."
- Song of Solomon 2:11,12
Not yet, but we're gaining on it.
later, mcm fans...
* Crass Commercialism Corner *