...to summer.
Not that I have a problem with the Labor Day Holiday per se...
It's just that - for obvious reasons - I was a lot happier to see the first "summer bookend", Memorial Day Weekend.
Then we beheld the entire summer stretching out before us, months of warm weather, t-shirts, shorts and sandals.
There were cookouts to savor, fireworks to watch, rounds of hickory golf to enjoy.
Poolside pleasures beckoned, evening campfires awaited, floral delights enticed us.
But apparently I blinked, and now...well now, another summer is already in the rearview mirror... 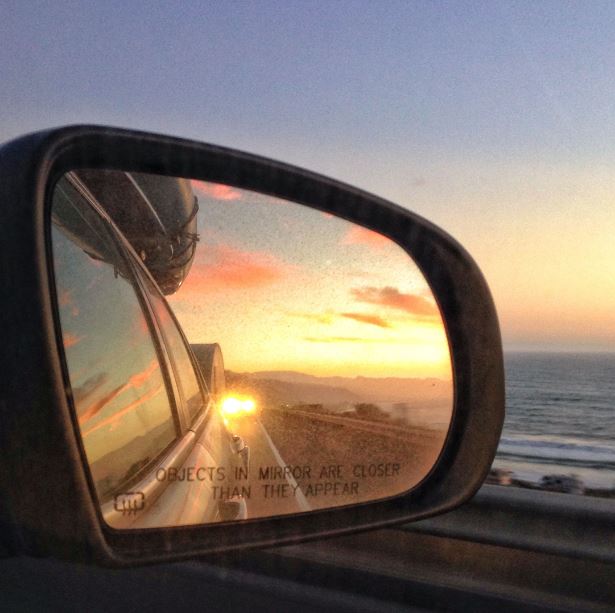 Here's something you don't see every day:
Thankfully.
It's very brief so you might have to play it a couple of times to get the gist.
Creepy.

Yes, as my separators (above) indicate, I've run up the white flag of seasonal surrender.
I know the meteorology geeks will scream since Fall doesn't officially arrive 'round these parts until the autumnal equinox, September 22nd... 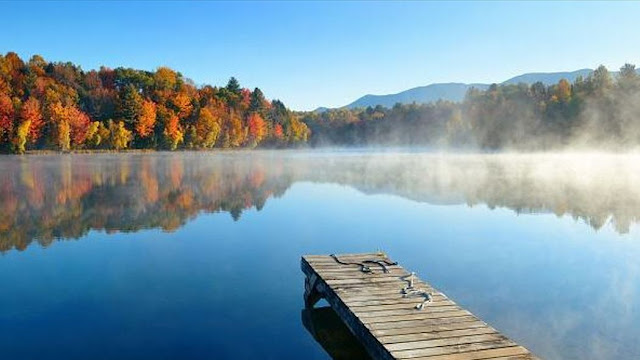 ...but the calendar tells me it's now September and here in Michigan, that's when Fall begins... 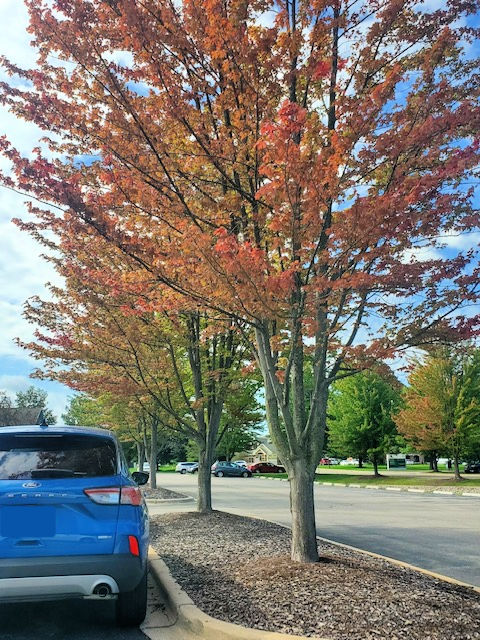 ...as this recent pic from a visit to the doctor's office illustrates.
Really?  Leaves changing color already?
Heavy sigh...

In the "Boy Ain't That Sumthin'" department, here's a pic Karen took when we moved in here 5 years ago: 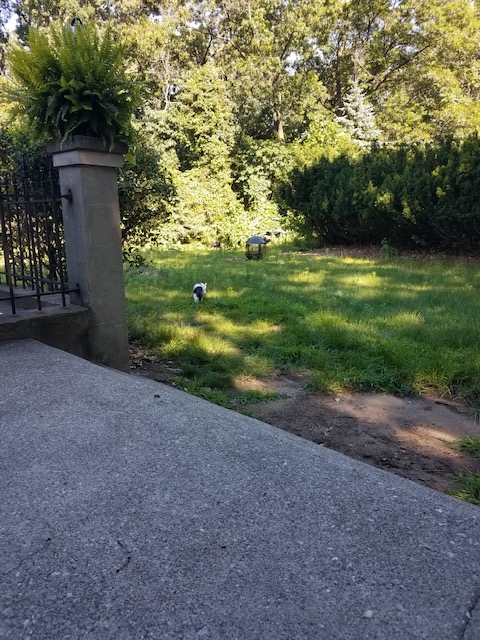 That's standing on our back patio looking at part of our backyard in the summer of 2017.
Here's what it looks like today: 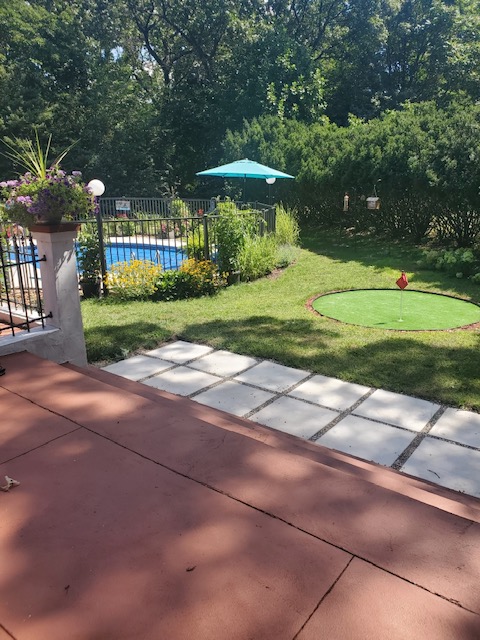 A side by side view makes it a little easier to see the transformation:
Gotta hand it to Karen...by God's grace she had a vision for what it could be and the drive to make it happen.

One thing I definitely do appreciate about the change of seasons is Fall golf. 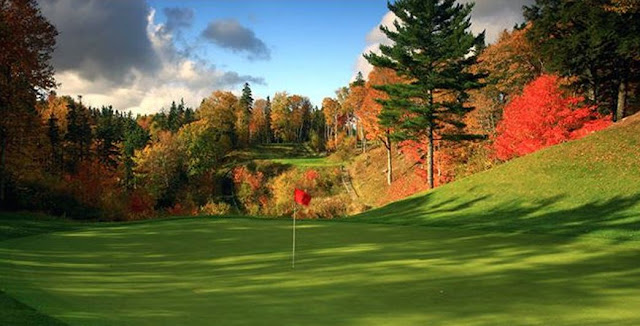 The cooler temps and beautiful colors make each round that much more delightful.
Now if I could just up my game to match my beauteous surroundings I’d be a happy man.
This, however, was not the week, as once again golf nirvana eluded me.
Really only had 1 bad shot - a push to the right from the #6 tee that resulted in a lost ball and a double bogey.
My problem remains the same as always...
...I can't putt to save my life.
Today I was on the green from the tee 6 times out of 9 and managed only 2 pars; the rest were bogeys.
Reminds me of a joke my dad told back in the 60’s about a man who trained a gorilla to golf.
“Watch this,” he tells his friends as the gorilla prepares to tee off on a 500 yard par 4 hole.
He hands a 5 iron to the gorilla who proceeds to hit a 500 yard drive that lands 6 inches from the hole. 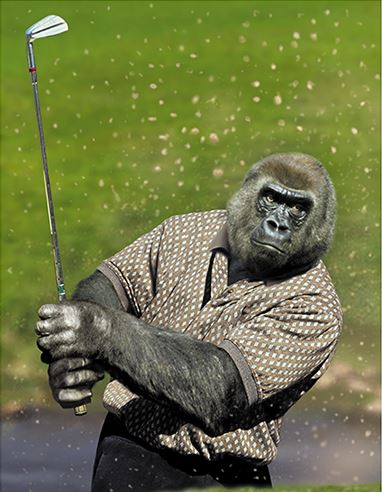 “Amazing!”, "Fantastic!", "Incredible!", his friends exclaim as they excitedly follow the gorilla to the green.
Once there the man hands the gorilla a putter.
As they all stand back to watch, the gorilla calmly leans over the ball and strokes a 500 yard putt.
Lord willing, this gorilla will tee it up and try again next week.

Perhaps I should just let it go.
I mean the man is obviously insane, suffering from the late stages of dementia, and can't be taken seriously.
He's a corrupt, unaccomplished buffoon; a cognitively impaired liar.
Little more than a puppet, a mouthpiece, he probably can't tell you 5 minutes after they turn off the teleprompter what he just recited.
But the power behind the throne - the people controlling him - know very well what he's doing and saying, and those people are dangerous.
Attacking 75 million Americans and vilifying them as enemies of their fascist state?
On prime time TV?
Welcome to Nuremberg 2022...
...with the Nazi like blood red background and the military standing at the ready while the lunatic clenches his fists and rages at his political enemies.
Lord, help us.

And finally, a few non-political Parting Shots as you storm the exits on your way to some Labor Day Weekend fun... 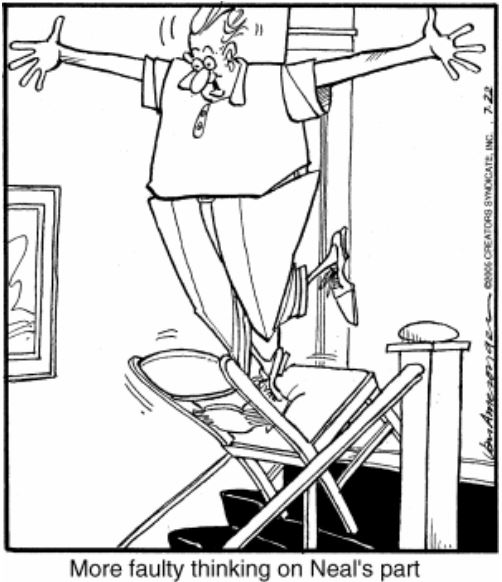 Something to keep in mind... 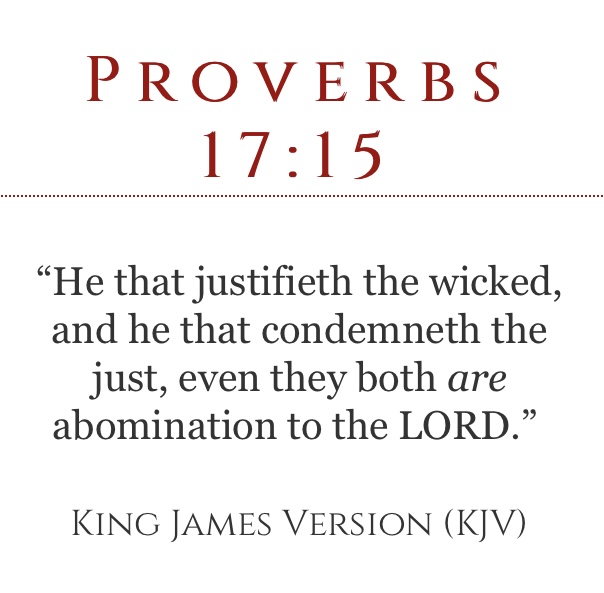 In The "Strange Doin's" Department... 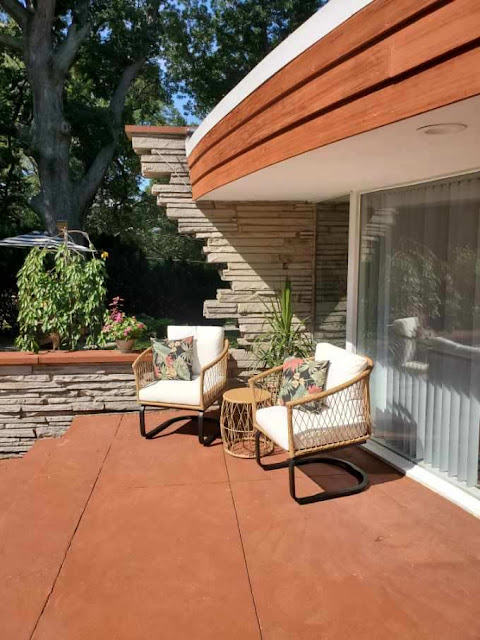 ...Karen posted these pics on the Aldi's group... 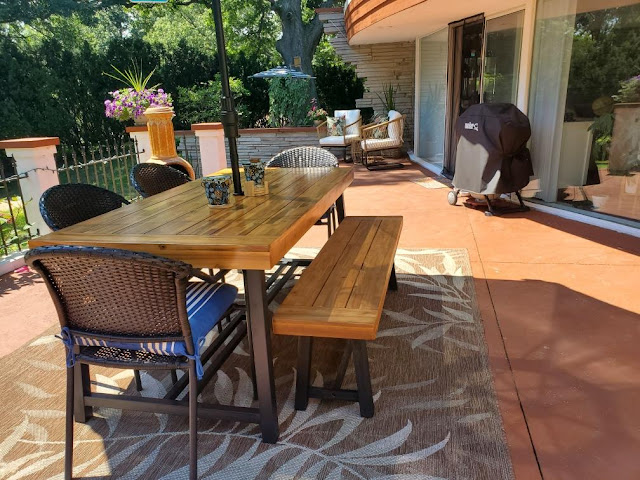 ...and in short order had more than 1,200 likes and comments.
The odd part is the hubbub wasn't about the outdoor chairs and table - that were indeed purchased from Aldi's - but rather our house, with requests for more info / pics.
Because of this, Karen connected with a woman who was a student (35 years ago) of the architect who designed our home, Dean Bryant Vollendorf.
The lady said DBV was a stern professor, but quick to recognize design talent, and obviously a disciple of Frank Lloyd Wright and a proponent of mid century modern architecture.
Fascinating discussion, and all because of a discount grocery store. 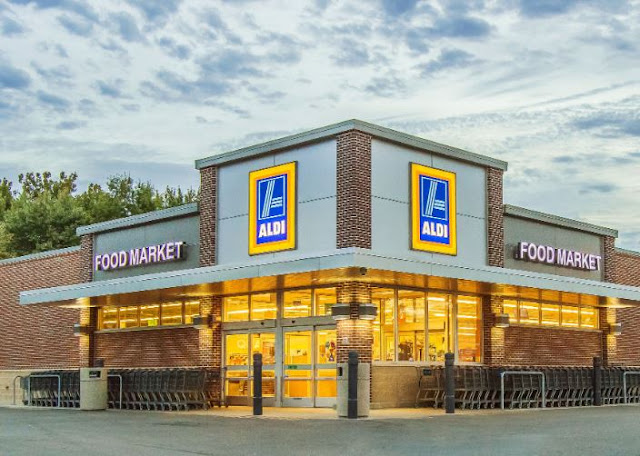 Did I get your hopes up?

Y'know, by NOT starting off with hickory golf, you thought you might have escaped??

Sorry to disappoint, but I promise this will be brief.
If it helps, please know it hurt me far more than it will you.
The "OK" part of my round: holes 3 through 9.
Though I struggled a bit from the tee, I still managed 3 pars and 4 bogeys.  I'll take that any day of the week.
The "throw myself in front of a bus" part: holes 1 (triple bogey) and 2 (double bogey).
When you're already 5 over par and you've only played 2 holes, the temptation to walk off the course and call it quits is very real.
I soldiered on, finishing the day right at bogey golf, but on 3 of the greens my last stroke was a tap in of 4 inches or less. 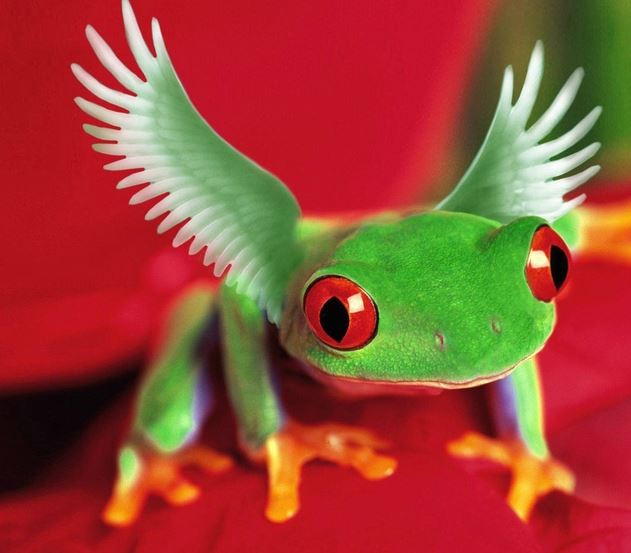 Yeah I know; if a frog had wings...
One more Friday morning session, and thus endeth my 4 day summer work weeks.

Ever seen one of these? 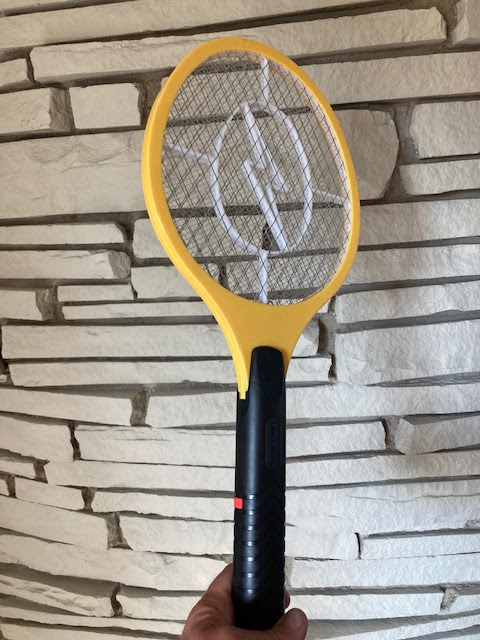 No, it's not for playing electro-tennis; it's a hand held bug / fly zapper.
Karen came home with it the other day from - you guessed it - Aldi's.
You put a couple of AA batteries in the handle, and when you press the red button and swat a fly, you hear a loud electric pop as it zaps them.
Experience shows it does NOT instantly electrocute the little buggers; instead they go into a sort of WWI biplane death spiral... 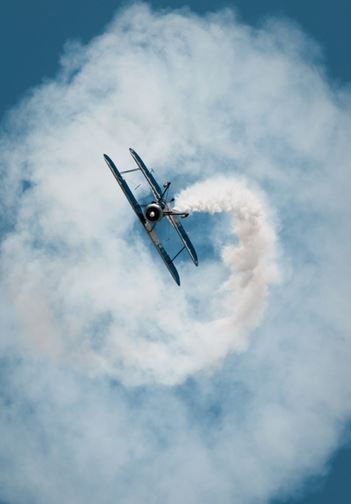 ...as if they'd just been shot down by the Red Baron.
And sometimes you have to zap them again to administer le coup de grâce.
From a practical standpoint it's cleaner than smashing them with the traditional fly swatter, but that electrical zap sound...creepy...

This ain't exactly news, but... Panic!  and not just at the disco, either. 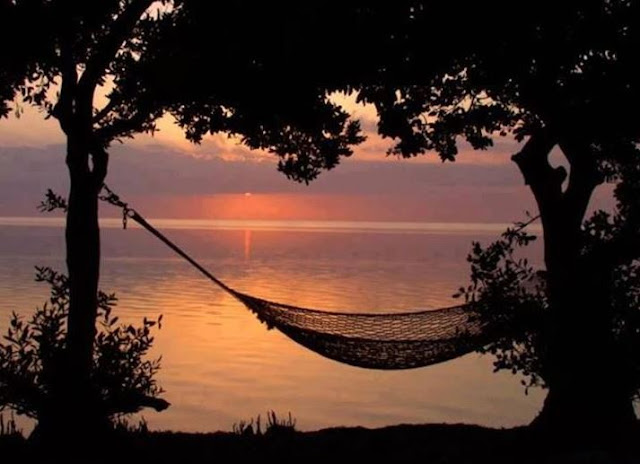 Or maybe not.
Perhaps we just need to make the most of the good weather we have left, whether it's a lazy summer evening in the hammock or a gorgeous fall morning on the links. 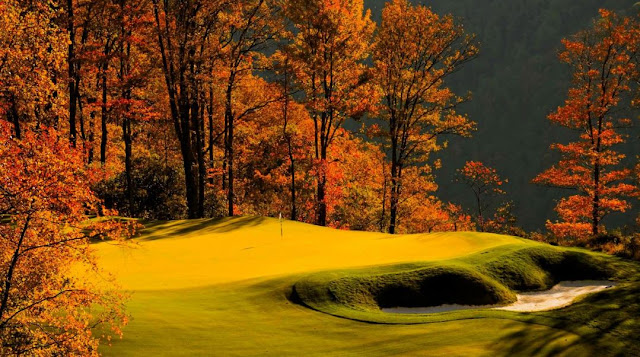 A poet I am not, but there's no denying…definitely going to miss summer:
summer's end
in the fading days of august,
near the end of summer's reign,
when melancholy scents the air,
and daylight starts to wane,
with autumn waiting in the wings,
to dance across life's stage,
it's then I long to turn the hands
of time to June again.
delights of summer beckoned yet,
amid the lengthening days,
verdant frolics called to us,
from summer's lazy haze.
a morning reading poolside,
a sunset by the shore,
a carefree forenoon promenade,
a summer evening storm.
but time raced on so quickly,
and days flew by too fast,
the joys that once were future,
soon segued to our past.
and so we greet fair autumn!
possessed of fall delights.
but O!  I'll miss those clarion days,
and clement summer nights.

Still suffering through supply chain issues, in spite of Mayor Pete's best efforts at fighting racism and climate change...
...so once again we're a little light in the Parting Shots department...

It's a gorgeous morning and I'm going to get outside, but before I do I leave you with this reminder from God's Word: 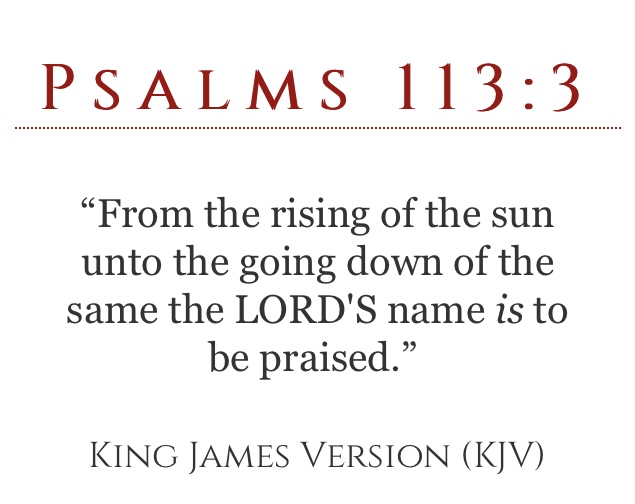