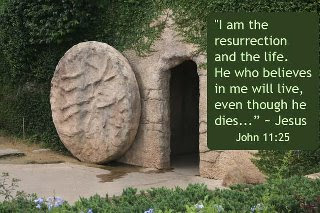 ...He is risen...and for that we give thanks to God in heaven.

A couple of hopeful signs of early spring: 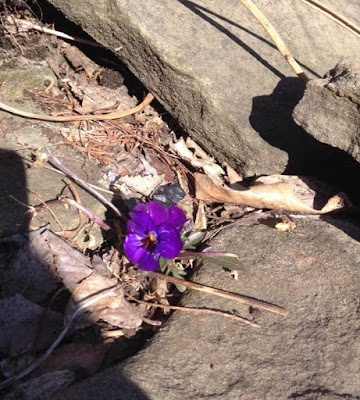 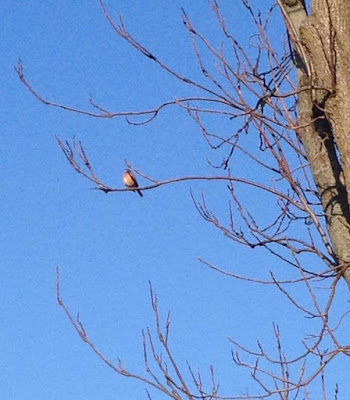 This is a conflicted weekend for me, because after a long battle with cancer, my older brother Ken died on Friday evening. 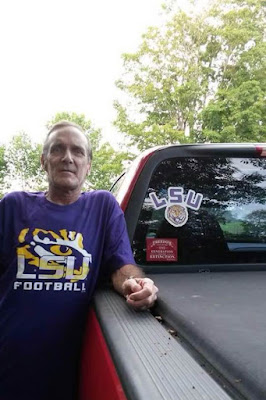 That's Ken within the last year, showing the effects of his fight.  He was a life long LSU fan, thus the T shirt and truck decal. 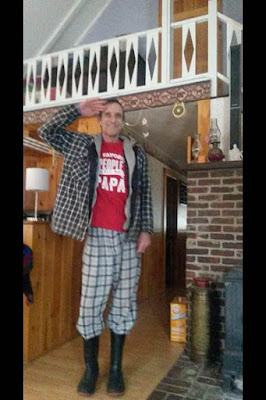 Above, Ken's preparing to go out and get the mail...during the winter where he lived in Maine, getting the mail could be an adventure...note the boots and farewell salute, just in case.

These are his five sons and stepdaughter. 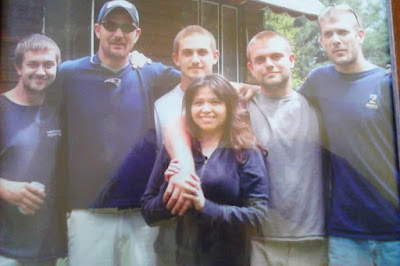 Note the son on the far right...that's how Ken looked in his youth...the second one from the left looks a lot like Ken, too.

I won't pretend we were close...that's a long story not worth repeating...but we were family, and he was my last living family member...Mom, Dad, Phil and Ken are all gone now, leaving li'l ol' me.  Strange feeling.

What I feel worst about right now is a trifle, hardly worth mentioning, but it weighs on my heart.

I have one review of my books on Amazon.com.  That review is for "Papa's Model T: The Genesis", and Ken wrote it.  It says:

"Of course it's a cool book.  my brother wrote it."

If you knew the relationship we had through the years, you'd understand how amazing that is.  He told Karen on facebook he loved the book, and hoped there'd be a second one for him to read.

I had an idea for the next book, and knowing Ken did not have a lot of time left motivated me to hurry up and finish it.  I got proof copies, but found errors so corrected them...more proof copies, more corrections, until finally it was ready for publication.

At last I mailed a copy to Ken on Thursday...just in time for him to never read it.

Ecclesiastes says "the heart of the wise is in the house of mourning," so I will pause and reflect on the things of eternity this weekend.

As I do I will keep in mind the amazing truth Jesus conquered death when he rose to life again.  From defeat and despair on crucifixion Friday arose life and hope on Resurrection Sunday.  We press on.


There is no coherent segue from the significant to the mundane, so I won't attempt one here. 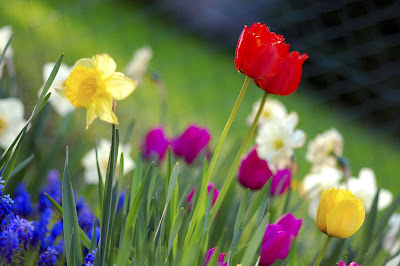 ...2016...and none too soon.  Ok, none too late, either from a meteorological standpoint...give thanks for the vernal equinox, when daytime and nighttime are about the same length.  The good news is daylight is increasing now.

Either way, I am completely over winter and anxiously awaiting more than just the date on the calendar as evidence spring has sprung.  We are in desperate need of some actual sunshine and warmth.

Missed out on the holy grail of radio collecting this week...saw a Stewart Warner R-192 on ebay: 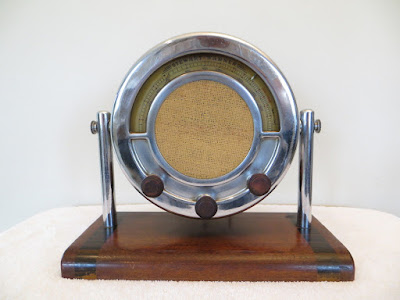 A beautiful, rare Canadian radio from the 1930's...I threw a bid at it, knowing it wouldn't last, and boy was I right...someone with a lot deeper pockets than mine shelled out almost $3,900 for this gem.  Sorry, but even I think that's crazy...radio is probably worth around $2500.

One I did happen to grab this past week for considerably less than that is this 1949 Philco, a combination radio and 78 rpm phonograph: 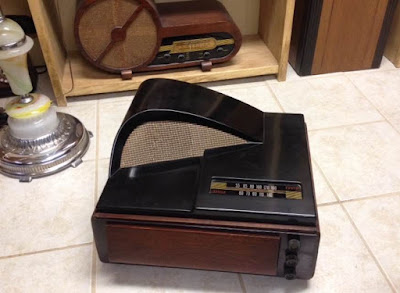 Styled like their "boomerang" radio from the same year, it's a very cool, early mid century modern marvel.  Here's a pic of how you put your 78 record inside: 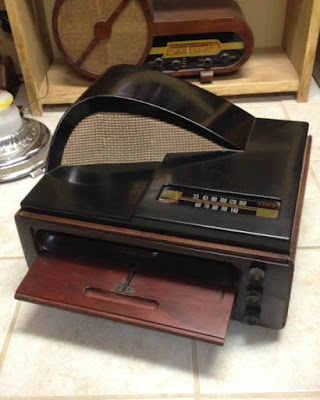 The radio works, the phono does not, so I'm dropping it off at Bob Chase's a little later today...not that I have dozens of 78 rpm records mind you, but I like the stuff I buy to work.

Finished book two of the Papa's Model T young readers series, and "The Rescue" is now available on Amazon.com: 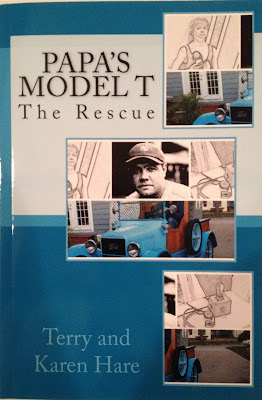 You can find it here:
Papa's Model T: The Rescue

All feedback is welcome, of course. 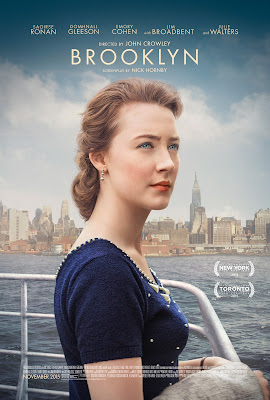 This is an intelligent, thoughtful movie about an Irish immigrant in the early 1950's and her struggles coming to terms with her new life in Brooklyn, New York.

More than that, it makes you think about the amazing truth that millions of people from other countries left their homelands for more opportunity and a better life for themselves and their families in America.  Along the way they built our bridges, tunnels, roads, buildings and became the backbone and the engine that makes this country work.

It's well worth your time to see this movie and contemplate the broader truths it suggests. 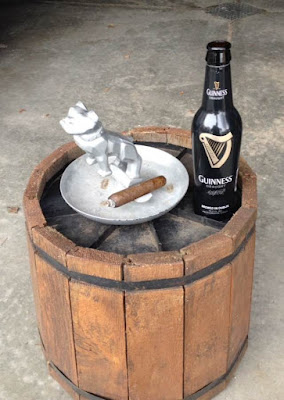 ...for an enjoyable afternoon...Guiness Stout and a cigar...a pleasant interlude.

Meet the newest member of the Wild Hare automotive family:
Karen bought this a couple of weeks ago and has been working on getting it road worthy...looks like after 6 years of driving the pee pee car, I now have a new ride.
Another view: 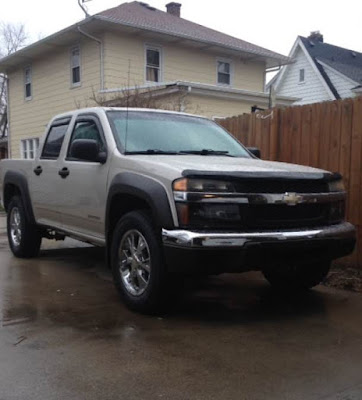 Took me a while to warm up to this vehicle, but it is in good condition and it's a lot nicer than the stripped down, 2006 Cobalt I've been piloting.

Today - time change Sunday - dawned rainy and cold, but at least it's not snow...the view from my garage this morning: 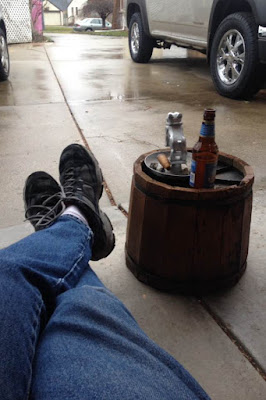 Finished the second book in the Papa's Model T series...book II is called "The Rescue": 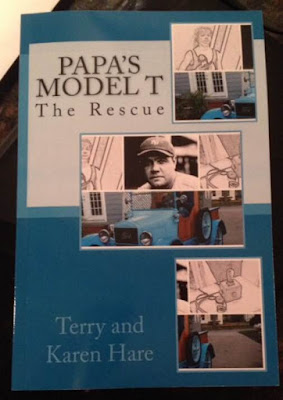 Yes, that is Babe Ruth on the cover...you'll have to give it a read if you want to know how The Bambino fits in with Papa X and Ike.

No surprise I'm liking this series, bc A) I enjoy writing,  B) I love my Model T, and C) the 1920's was a fascinating decade.  Writing stories that involve those elements is pretty easy so far.

Still kicking around what book three will be about, but this theme is one  that is rich in possibilities.

Posted by Iwriter at 8:54 PM No comments: