How Is It Possible... 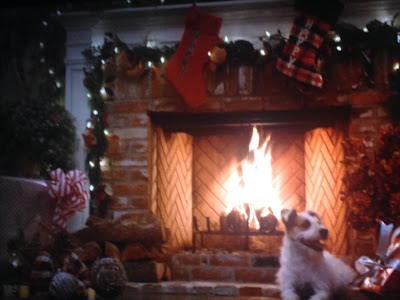 The above, by the way, was broadcast for almost 48 hours straight by one of the Hallmark channels...a yule log with "Happy the dog" and "Happy the cat" sniffing around the area off and on.  Very pretty, actually...they played Christmas carols the whole time, too...Karen and I sat downstairs in the theater room for an hour with that on the big screen while we decompressed from the Christmas rush.

As holiday seasons go, this one was pretty good...work was crazy busy as always, but not chaotic...and by Christmas week we were winding down...just in time for me to take a long four day weekend.

We did in fact watch Scrooge on Christmas eve, then enjoyed a relaxed Christmas day with Karen's kids, and Amy's boyfriend...opened gifts, enjoyed a good meal prepared by Karen... 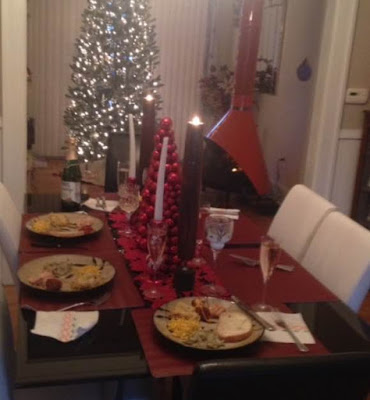 ...and marveled at how long it takes Christmas to get here and how quickly it races by each and every year.

Amy bought me a couple of cool gifts...a vintage style football and helmet...and they inspired me to set up a display among my 1930's radios downstairs of my favorite NFL player of all time: 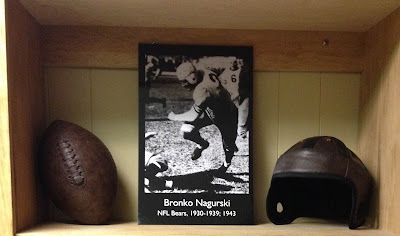 That's Bronko Nagurski, the legendary Minnesota All American and NFL Hall of Famer.  They used to say you could always see the path Bronko ran after every play by following the trail of blood.  A big, bruising, two way player, he led the old Chicago Bears to three NFL championships, coming out of retirement in 1943 for the last one.

He was also the world heavyweight champion in wrestling, back when wrestling was real...a man's man during the era that was considered a compliment, not a politically incorrect offense to all the feminazis and pajama boys of today.

Here's a shot of the display as it sits among some of my art deco radios: 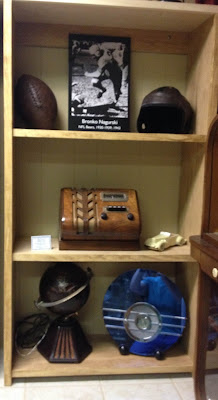 Karen dragged me out to the mall the day after Christmas, and I have to admit they do a good job of decorating and making it festive: 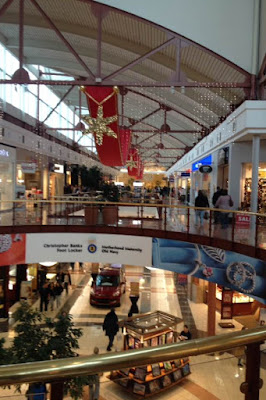 'Tis the season for shopping and they try really hard to make it as pretty as possible while you're divesting yourself of all your hard earned cash.

One of my favorite Christmas cards this year was actually an invitation to the work Christmas party:

Very mid century modern look and feel which made perfect sense since the boss' home is a spectacular mcm gem from the mid 60's...love that vibe.

So it's back into the fray tomorrow, but only for three days...then I have another four day weekend coming up to finish out the year.

Posted by Iwriter at 9:26 PM No comments: 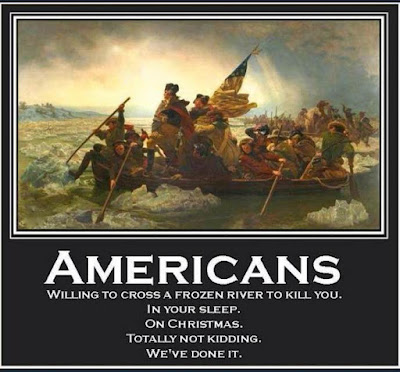 Got the above from my son Benjamin, a former Navy Petty Officer...a humorous but stark reminder we live in a world that is ruled by the aggressive use of force.  As much as we all wish there could be Peace On Earth, and Good Will Toward Men, that remains a goal to be achieved rather than a present reality.  In this Christmas season we turn our eyes toward God in heaven and thank Him once again for the gift of His Son as we look forward to the time when Thy Kingdom Come, Thy Will Be Done On Earth As It Is In Heaven.

Until then, we remain ready to cross as many frozen rivers as necessary to protect our God given rights of Life, Liberty, and the Pursuit of Happiness.

We were shopping in a department store the other day and they had bunches of these little silver Christmas trees all over the store:

That's the one item I might have bought there, but it was a store decoration, not for sale.

Karen has been busy cooking today, and tonight we'll stick with tradition and watch Scrooge...best movie adaptation of Dickens' A Christmas Carol ever. 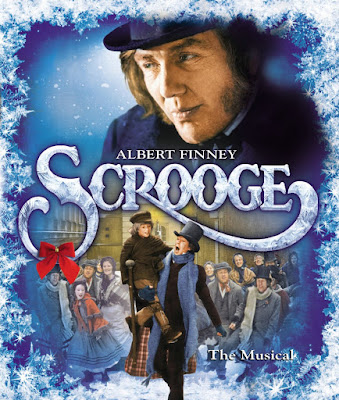 Hope whatever your traditions are on Christmas Eve, you take time to give thanks to God in heaven for the gift of His Son.

Posted by Iwriter at 6:59 PM No comments:

'Twas The Week Before Christmas... 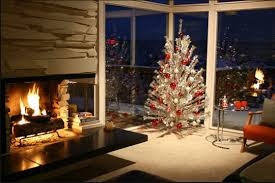 ...and every mouse,
had fled frozen fields
for the warmth of my house.

My wife found their droppings
and said “I'm not pleased,
to think that these varmints
are taking their ease 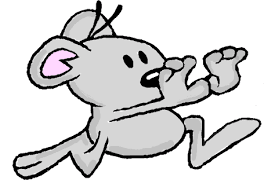 “inside my warm dwelling;
this outrage won't stand!
What will you do?”
Then I raised my hand...

“These mice, they are finished!
Kaput and kersplatz!
No way they'll survive,
for we have three cats!”

And then we beheld
our fat felines, all three: 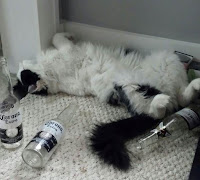 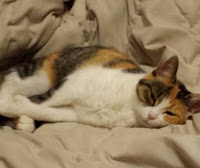 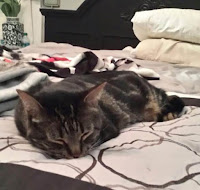 and the useless Smokey.

Disciples of Garfield,
were these pointless creatures,
with sleeping and eating
their most prominent features.

No help would be coming
from those worthless saps,
so I scrounged all around
til I found an old trap. 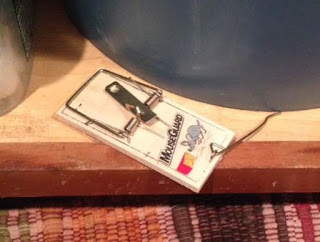 And later that night,
before mice came a-creeping,
I set the cruel deadfall
then got busy sleeping.

So early next 'morn,
at dawn's early light,
I sprang from my bed
to find what I might.

But what did my wondering
eyes finally see,
but a clean, empty trap
and a note left for me: 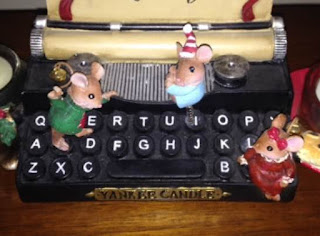 "Thanks for the cheese,
but what would be better,
instead of old muenster,
could we have fresh cheddar?"

"And what's with this platter?"
my mousy pals asked.
"We might have been killed
if we hadn't been fast!"

'Twas then that I thought
of the great Robert Burns 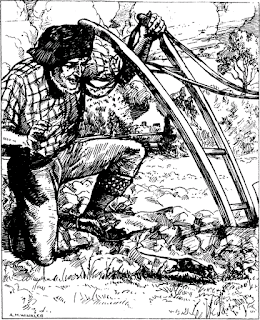 and his famous lament
to a mouse that he turned

Out of warm hearth and home
as he plowed in his field.
Did I want to partake
in his life time of guilt?

The best laid plans,
it is easy to see,
Gang aft agley
and I think you'll agree

There was nothing to do
but give them their cheddar.
After all, it was Christmas,
and what could be better 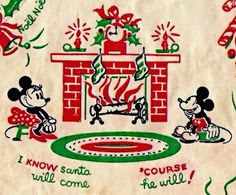 Than showing the love
God has for His swarm,
by letting them stay
inside where it's warm?

So out went the trap
in the cold, winter, night;
we're quite overrun
but I guess it's alright. 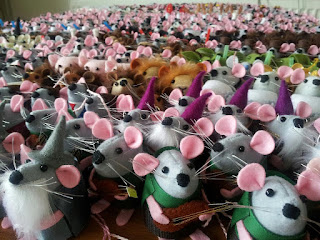 So to quoth from St. Nick
on his annual flight,
Merry Christmas to all,
and to all a Good Night! 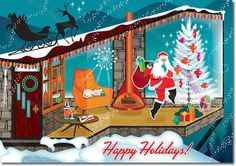 Posted by Iwriter at 6:57 PM No comments:

Email ThisBlogThis!Share to TwitterShare to FacebookShare to Pinterest
Labels: robert burns, twas the week before Christmas ...two weeks til Christmas...officially time to panic...happens every year...because of the craziness at work from before Thanksgiving right through Christmas, the season zips by and good luck getting everything done in time.

Oh well, time to stop whining and get after it.  On the plus side, there's no snow to slog through this year...it was in the 60's today so I took Mr. T out for a nice drive. 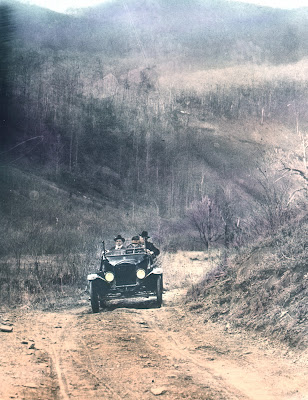 Well, didn't take it quite that far...just around the neighborhood and Lamar Park...an enjoyable jaunt. 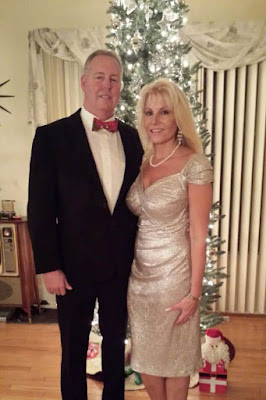 Karen was resplendent in her Christmas finery, but I don't know who the old guy is she was with in this picture.  I might be jealous except whoever that is has to be at least twenty years older than me, so no threat there.

Today has been a recovery day...turned on Christmas carols this morning and pretty much let them play all day...give me an excuse to use some of my old, art deco radios...
Later, mcm fans...
Posted by Iwriter at 7:15 PM No comments:

Out of the night that covers me,
Black as the pit from pole to pole,
I thank whatever gods may be
For my unconquerable soul.

In the fell clutch of circumstance
I have not winced nor cried aloud.
Under the bludgeonings of chance
My head is bloody, but unbowed.

Beyond this place of wrath and tears
Looms but the Horror of the shade,
And yet the menace of the years
Finds and shall find me unafraid.

It matters not how strait the gate,
How charged with punishments the scroll,
I am the master of my fate,
I am the captain of my soul.

...in spite of Cyber Monday/Cyber Week...mixed feeling about Mr. Henley's poem...rousing prose in some ways, incredibly delusional in others.  The last couplet, especially, brands him as a fool.

Nevertheless, it has become over time the standard to which people repair when facing a challenge that promises to stretch and batter them.  And while the above may be hyperbole when applied to the challenges of Cyber Monday/Cyber Week - let's face it, none of us were living in a foxhole, surrounded by enemies trying to kill us - still it rings true on some level for the chaos we've endured here at work...and all because we worship at the altar of consumerism.  May God in heaven have mercy on our souls.

Spent time this past weekend finishing up Christmas decorating, republishing my books on Amazon...added an afterword to the text...and then browsed a favorite antique shop with an art deco / mid century modern emphasis.

Posted by Iwriter at 9:04 AM No comments: