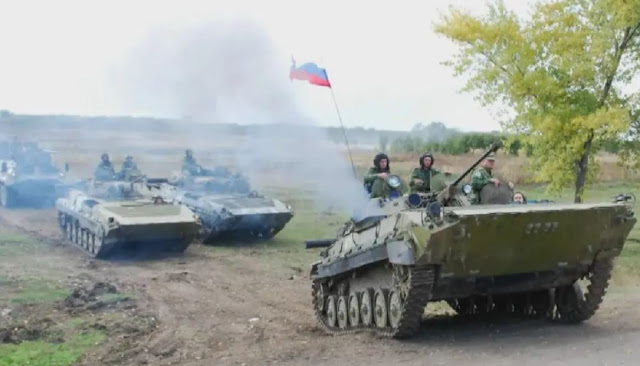 ...is the little time necessarily spent...reloading their guns."
- Robert G. Ingersoll
I don't normally turn to 19th century agnostics for words of wisdom, but sometimes truth is where you find it.
And here we go again with the war drums...this time it's Russia invading Ukraine. 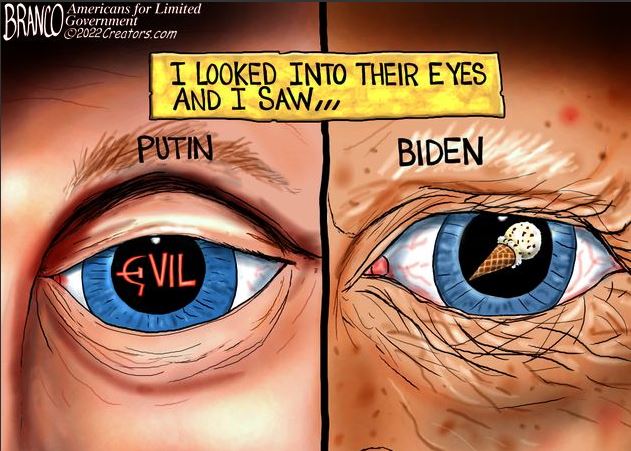 Fortunately we're blessed to have SloJoe and his highly trained associates at the helm during this international crisis.
In a recent one on one with an NBC lapdog, VP Harris was reminded that in spite of SloJoe's empty promises to "shut down the virus", covid was still very much alive and well.
Was a course correction needed?  Was it time?
In an awe inspiring display of brilliant analysis, Harris summoned the full measure of her impressive intellect, leaned in to her softball pitching faux adversary... 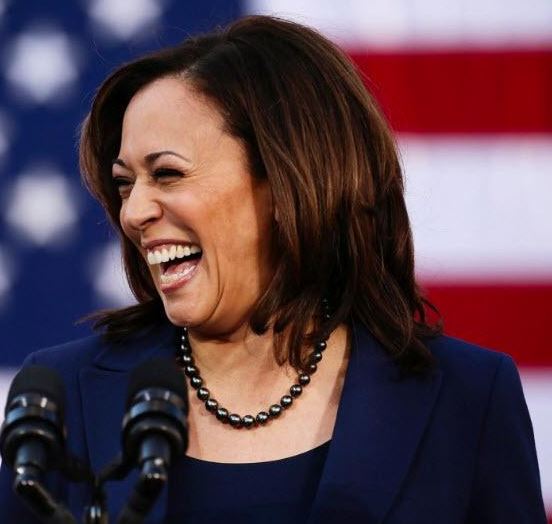 ...and with a deadly serious look left us with this gem of a response:
"It is time for us to do what we have been doing.
"And that time is every day."
There you have it.  No wonder the secret service nickname for her is DeepThought.
Equally reassuring is our always relevant Climate Czar, John Kerry...
...whose one notable achievement in life has been marrying into the Heinz fortune.
Now - when he's not lounging around his wife's enormous mansion or sailing on her luxurious yacht - he spends his days crisscrossing the globe in a private jet, preaching about the evils of carbon emissions.
You might think this would make Lurch feel just a teeny bit guilty since, you know, he's personally responsible for a whole crap ton of carbon emissions, but not to worry.
While the covid so-called "vaccine" can't prevent you from getting or spreading the virus, the elites in this country have apparently found a real vaccine against self-awareness that's 100% effective.
Money, privilege, power perhaps?
Whatever it is, it definitely works.
And so, when the hot war began and images of exploding buildings and injured Ukrainians filled our TV screens... 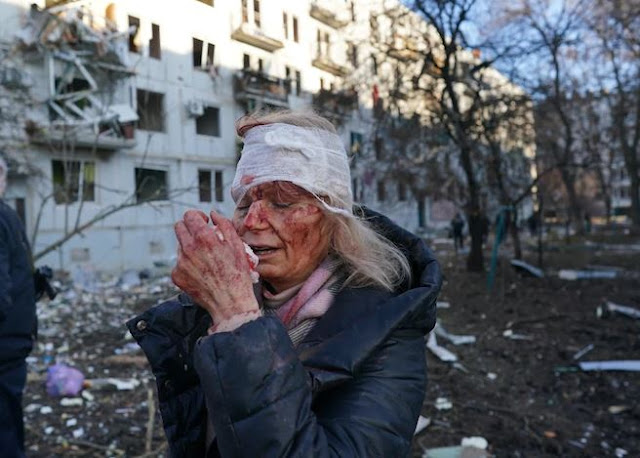 ...the obliviously self-assured Lurch sat down for an interview and gave us the full benefit of his timeless wisdom:
"I think hopefully, President Putin would realize that in the northern part of his country, they used to live on 66% of … frozen land.  Now it’s thawing and his infrastructure is at risk, and the people of Russia are at risk.”
So it’s true...arrogance does make you stupid.
No doubt, right near the top of Vlad The Destroyer’s priority list, perhaps just a notch or two below "overrunning neighboring countries, controlling western europe and restoring Russia to its Soviet Union glory", is a deep and abiding concern for the climate. 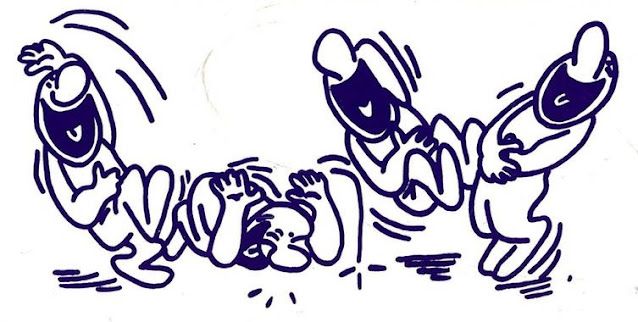 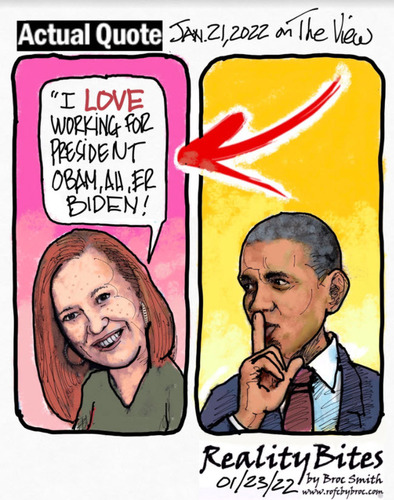 A reporter reminded her that SloJoe remarked a week before, he knew Russia was going to invade Ukraine and nobody expected sanctions would stop him.
The reporter then asked the obvious question: in that case, what have you actually done ?
The woman who's giving redheads everywhere a bad name reached down, grasped the wooden handle of the starter cord, gave it a brisk tug and cranked up the propaganda machine.
"We've rallied world support," she blathered as yet another noxious cloud of lies filled the room, "and built a global coaliton!"
Ah, of course...a global coalition.
We're now in day four of Russia's invasion of Ukraine.
Maybe Jen should trot on over to Kyiv and conduct some "man on the street" - or more realistically, "man huddled in a bomb shelter" - interviews with terrified Ukrainians to assess how well her mythical coalition is working.
Lord, please help us.
In this most serious time, these are not serious people.
In 2020 America was energy independent, exporting our excess, and oil was $40 to $50 per barrel.
We're a little more than a year into the SloJoe Show, during which time he shut down the energy sector of this country, and we are now back to begging OPEC, China and Russia to sell us more oil.
Not surprisingly, the price of oil has risen to over $100 per barrel.
Our enemies have been enriched, strengthened and emboldened.
We have become poorer, battling runaway inflation and are reduced to pleading with China to help us deter Russia.
Predictably, they rebuffed our pathetic requests.
SloJoe's chickens are coming home to roost... 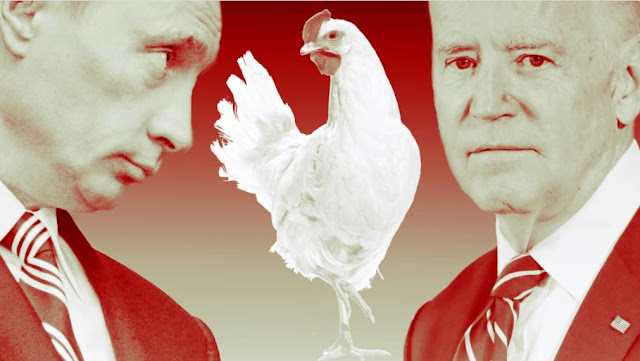 ...and sadly, thousands, if not millions - here and abroad - will pay the price for his weakness, stupidity and incompetence.

In the meantime - here, anyway - life goes on, and one of the small blessings for which I'm thankful is this last weekend of February. 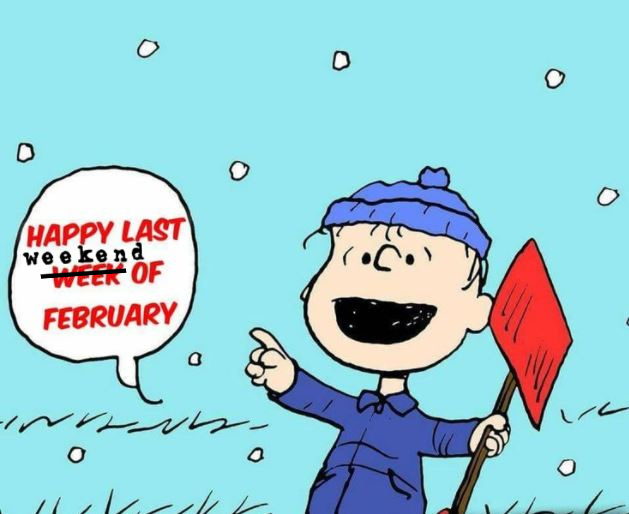 Finally slogging through the shortest / longest month in the year stirs hope for warmer days ahead.
The time change... 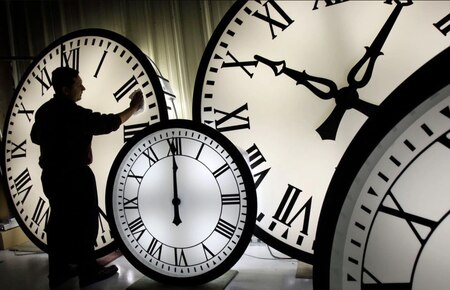 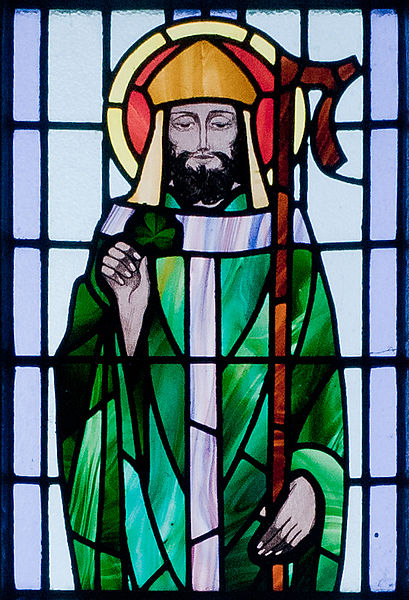 ...and then glorious Spring...
...all occur during the next three weeks.
In addition, Karen and I have made a stuttering start on bowling again (i.e., we've been twice)... 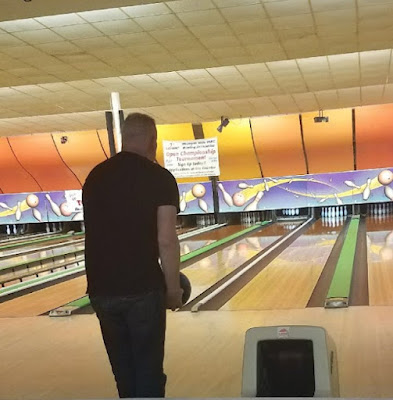 ...with enjoyable if not spectacular results.
It's the plight of the serial beginner.
If we bowled regularly - once or twice a week - we'd develop muscle memory and endurance, and would probably see some improvement...but right now that's not going to happen.
Once summer rolls around and I'm taking Fridays off again, I may combine my golf outing with bowling on the way home.

That's as long as we haven't gotten into a shooting war with Russia by then.

Enough already!  Time to actually do something instead of just bloviating on this blog.
I leave you with this happy thought: 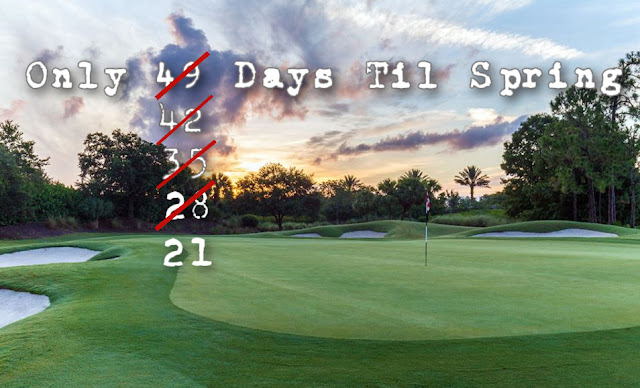 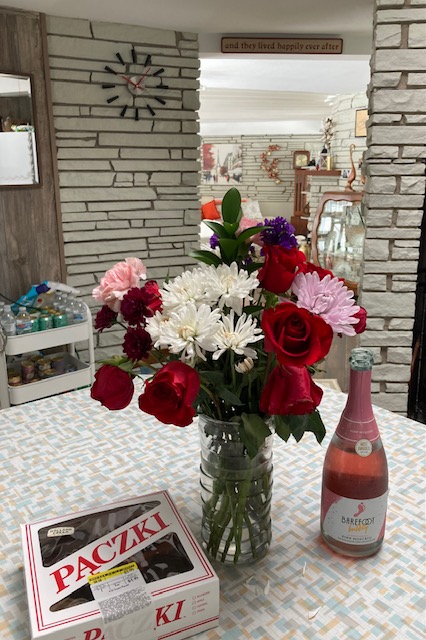 ...what February 14th is, right?
Well yeah, there's that whole Valentine's Day thing, which any man with an iota of common sense - not to mention, the instinct for self-preservation - intuitively understands he'd best not forget.
You didn't, did you?
But February 14th is also "The Pale Blue Dot" day... 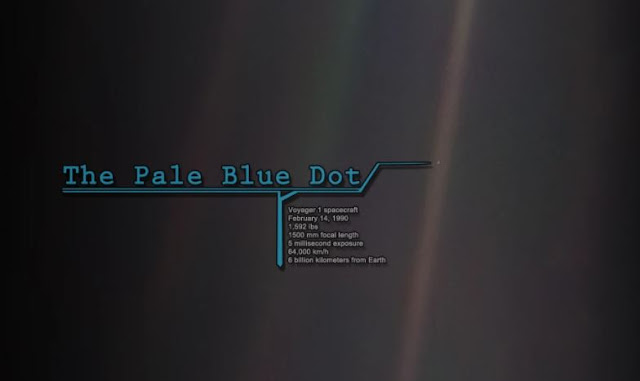 ...for on that date back in 1990, the Voyager 1 spacecraft took the above photograph from 3.7 billion miles away as it was leaving our solar system...

...and that pale blue dot you see in the 1st image is planet earth.
Carl Sagan, atheist and astronomer, made it (in)famous with this quote:
“Look again at that dot.
"That's here. That's home. That's us.
"On it everyone you love, everyone you know, everyone you ever heard of, every human being who ever was, lived out their lives...on a mote of dust suspended in a sunbeam...

"Our posturings, our imagined self-importance, the delusion that we have some privileged position in the Universe, are challenged by this point of pale light.

"Our planet is a lonely speck in the great enveloping cosmic dark.

"In our obscurity, in all this vastness, there is no hint that help will come from elsewhere to save us from ourselves..."

Sagan argues our diminutive size equates to utter insignificance, and yet from our total irrelevance in the universe springs the necessity and ability to save ourselves.
Riiiight.
If we're meaningless, why bother?  Who in the uncaring universe would notice if we were gone?
Beyond that, anyone with even a rudimentary grasp of history knows how well mankind has done at spreading peace, love and happiness down through the ages.
Hitler, Stalin, Pol Pot anyone?
The Scriptures, however, take a distinctly different view of our world:
"The heavens declare the glory of God and the firmament showeth his handiwork.
"Day unto day uttereth speech and night unto night showeth knowledge.
"There is no speech nor language where their voice is not heard."
- Psalm 19: 1-3
It's not about us; it's about God's glory.
Not surprisingly, the Scriptures also have something to say about people who actually believe mankind sits atop the apex:
"The fool hath said in his heart, There is no God."
- Psalm 14:1
Rather than underscoring our insignificance, that picture does exactly the opposite:
It proves God cared for us enough to create our world and then sustain us in the midst of His immense universe.
We are important to God.
How do we know this?
"For God so loved the world that He gave His only begotten Son, that whosoever believeth in Him should not perish but have everlasting life."
- John 3:16
Rejoice that you're a resident of God's Pale Blue Dot. 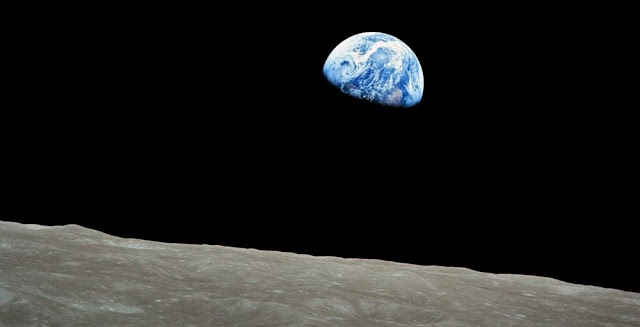 As a bonus, it comes with a free revolution around the sun every year, along with the opportunity to do good and be kind to your fellow sojourners.
Make the most of it.

This past week we watched The Aeronauts... 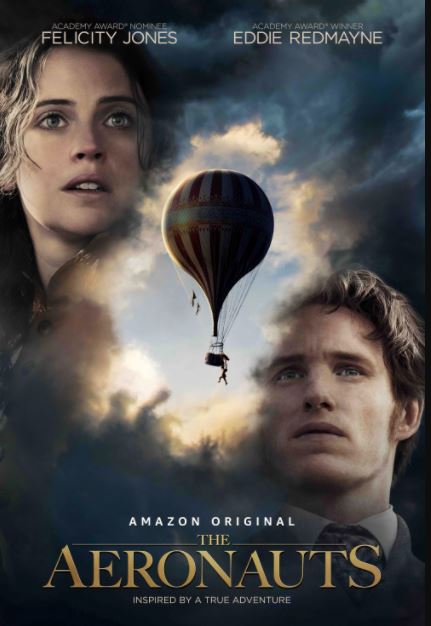 ...a movie set in 1862 and claiming to be "inspired by true events" (translation: any resemblance to reality will be purely accidental).
The historical event in question is the record setting balloon ascent made by English meteorologist James Glaisher and aeronaut Henry Coxwell.
On September 5th, 1862, these 2 ascended to the incredible height of 35,000 feet above sea level, smashing the previous record of 23,000 feet.
Unfortunately, Glaisher lost consciousness around 29,000 feet, and Coxwell lost the use of both hands shortly thereafter.
When he couldn't get the valve-line to release gas from the balloon so they could descend, Coxwell had to climb the rigging to the top of the balloon and ultimately released the vent with his teeth.
Try doing that sometime at 35,000 ft when you can't feel your hands.
He then lost consciousness, but he had heroically saved their lives: they did descend and land safely.
Giving the movie its due, it does tell the basics of the story pretty much as it happened, but with one truly inexplicable change.
This is Henry Coxwell in real life: 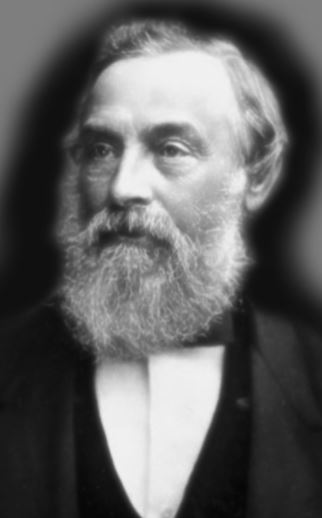 ...and this is who plays his part in the movie: 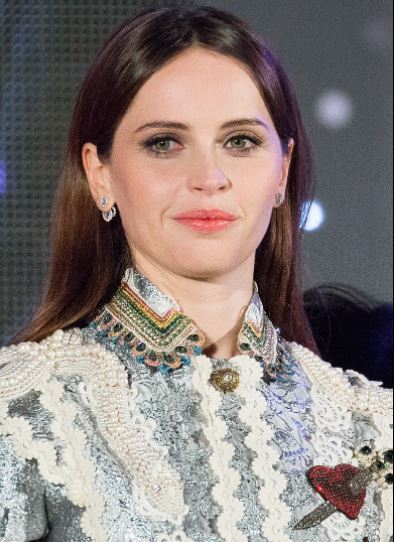 That's actress Felicity Jones, and in the movie she's "Amelia Wren".
Who, in history, was Amelia Wren?
Well, no one as far as this story goes.
She's been conjured out of thin air, which I suppose was in keeping with the balloon motif.
Ok, Miss Jones is easier on the eyes than the bearded Mr. Coxwell, but if you're going to change not just the name but also the gender of the actual hero of this incredible event, why not go whole hog and drop kick James Glaisher as well?
Sorry Eddie, but we're dumping you in favor of oh, I don't know, how about Lady Gaga?
Lessee, staying with the ornithology theme -
get it?  common birds flying high in the sky?
- in the movie she can be "Ophelia Finch".  (What?  I could have gone with Tufted Titmouse.)
"So Wren and Finch, see, they get this balloon, and they fly it, like, really really high, and then..."
Well, you get the idea.
Did Director Harper have a run in with someone named Coxwell back in the day, so he just couldn't bring himself to film the actual story?
Was he virtue signaling that even though it was a couple of dudes a hundred sixty years ago, you do realize it could have been a dude and woman because women are like, you know, equal and all.  No, really.  They are.
Or maybe he failed history class in high school and hasn't been able to deal with what actually happened ever since.
Who knows?  It's just weird.
It does have cool scenery though.
There are worse ways to give up a couple of hours of your life.
There are better ways, too.

Ok, let's all hold hands as we enjoy a brisk walk through the Parting Shots department, shall we?
If you're a germaphobe and the thought of holding someone's hand makes you physically ill, please see the gentleman in the suit for the special exit designed just for you... 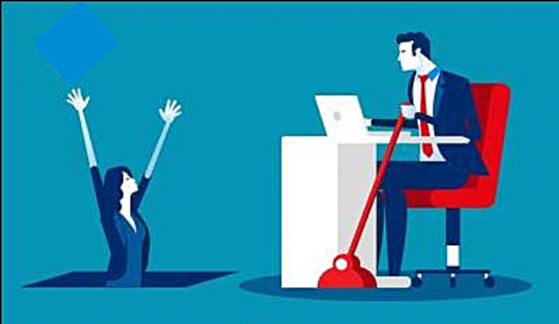 You can't tell by looking out the window, but... 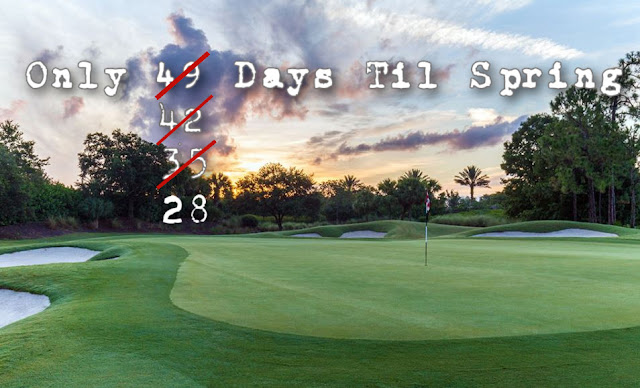