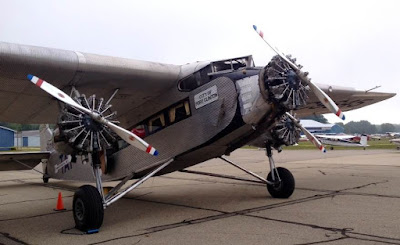 ...Tri-Motor...aka "The Tin Goose...at the Sparta airport this weekend, and Karen and I flew on it.

That statement conveys some factual information, but doesn't come close to communicating my emotional response to this event...and as much as I like to think of myself as a writer, I'm not sure I can put into words the feelings today's activities evoked.


Designed by William Bushnell Stout and financed by Henry Ford, this was the epitome of aviation technology in 1927 when the first one rolled off the assembly line...and this aircraft launched the civil aviation / airline industry.  The combination of its unprecedented capacity - 2 pilots, a stewardess, and 10 passengers - its range of 560 miles with a cruising speed of 120+ mph, and perhaps most importantly, Henry Ford's substantial reputation behind it, provided just the right mix of publicity and practicality, romance and reliability, to make airline travel legitimate.

Between 1927 and 1933 they produced 199 of these aircraft, and they flew commercially until the mid 1960's.  Now there are perhaps a dozen or so still around, and only two offer rides to the public. 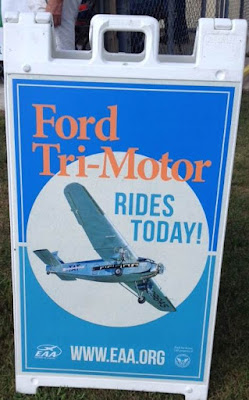 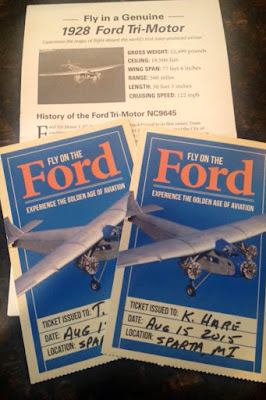 We flew on one of them today:

It's complicated, but 30 years ago I walked away from a career in aviation...having earned my commercial pilot's license with an instrument rating for fixed wing, single engine, land aircraft, I stood at a crossroads...and I decided I did not want to be a bus driver in the sky, so landed solidly in an IT career.

Today, for the first time in 3 decades, I seriously second guessed that decision.

I love vintage things, and especially those from the mid century modern and art deco eras.  Watching the grey haired pilot settle into the cockpit of this magnificent machine, I thought to myself, "that could be me".

He pressed the tri-handle throttles forward, the three legged beast roared to life,  its tail rose up, then we leaped off the runway and into the wild blue...that took me back to my youth in a way I never expected, and the thrill I used to experience daily but hadn't in years made me wonder...what if??