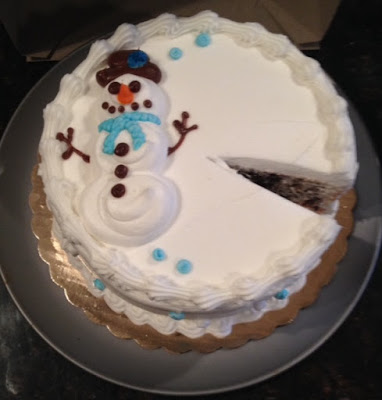 Odd that it came from the confectioner's with a piece missing...

Took the day off from work, which meant I only had to work a couple of hours from home today fixing various and sundry issues from the night before...insert excited "woo hoo" here...

Mid afternoon we decided to stop by the Broadway Bar...featured recently on 8 West mostly bc of its crazy, over the top Christmas decor...they made it sound so cool we just had to stop in.

Verdict?  It's ok, but I have to admit we wondered what all the fuss is about.

It's a little hole in the wall bar that might seat 30 or 40 if you shoe horned them in...and they do have way too much stuff hung up everywhere...some of it vintage cool... 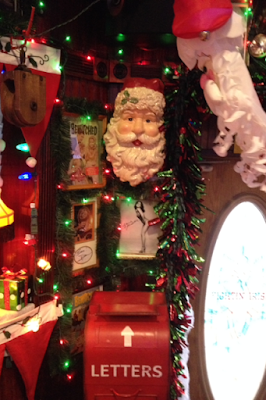 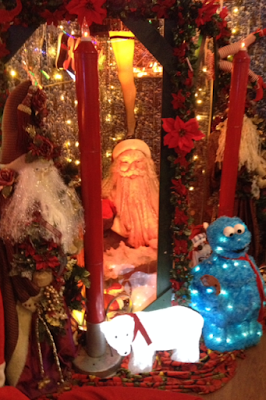 ...and some of it just early American tacky.

They do have great burgers which is what they're known for...we got a couple of loaded olive burgers and they were definitely great eating.

But we overheard someone asking when they should make reservations for next Christmas season, and the waitress said "August".

Sorry...I might reserve months ahead for the Nutcracker or dinner at the Cygnus, but the Broadway Bar?

To each their own.  Seems like a nice neighborhood bar where you can have a beer, a burger and few laughs with some friends, but it didn't change our lives.

Saw a cardinal sitting in one of our bushes during a snow storm today... 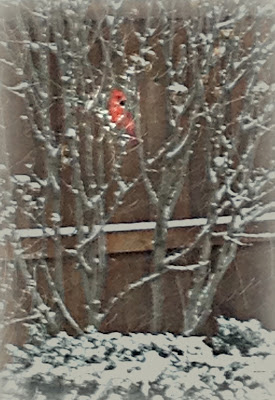 ...picture doesn't do it justice...it was very bright red against the white snow...beautiful.

This is probably the part of my blog entry where I should wax wisely philosophical... 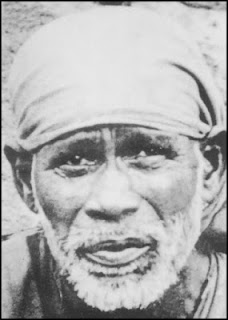 ...due to my ponderous years and the momentous event of my birthday, but no can do.

For one, getting older is not momentous; it's common; vulgar, even.  Also, the passage of time does not necessarily equate to the accumulation of wisdom.  And finally, even if you do possess great wisdom, very few people are paying attention anymore. 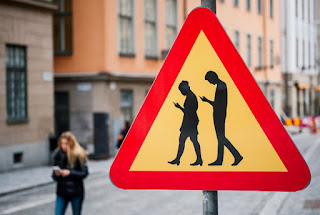 For most folks, if it ain't happening in the palm of their hand, it don't matter...and as I've aged I've tried to adhere to one ironclad rule:  don't waste time on people who don't listen.

It's amazing how much previously wasted breath and time that has saved me.

Maybe not, but it's been a good one...spent it with the woman I love, got a hug from my daughter Amy and let's face it...I'm blessed.  God in heaven is my Father, Jesus is my Savior, God's Spirit is my teacher.  My family loves me, I'm employed and I get to live indoors and eat.

Now that I think of it, can I change my vote?