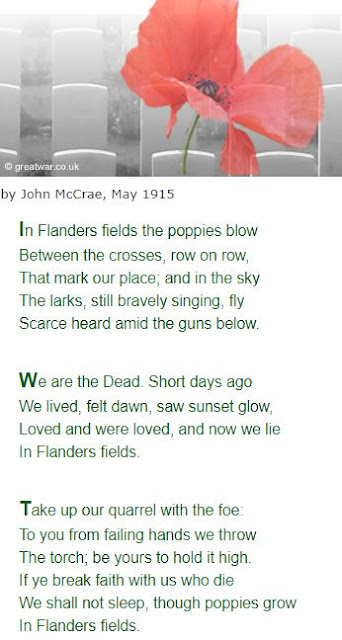 ...the moving poem from World War I...written by Canadian surgeon John McCrae upon the death of his friend in battle.

World War I was "the Great War", "the war to end all wars" because of the massive slaughter of over 9 million soldiers with 21 million wounded.

It finally came to a merciful end four years after it began, at the 11th hour on the 11th day of the 11th month...thereafter known as Armistice Day.

Surely from this extended horror mankind would learn to find better, peaceful ways to end disagreements.

History is dominated by the repetitive and aggressive use of force, often for ignoble ends.

We are meant to be free; it's our God given right, as so eloquently elucidated in the Declaration of Independence:

We hold these truths to be self-evident...that all men are created equal; that they are endowed by their Creator with certain unalienable rights; that among these are Life, Liberty and the Pursuit of Happiness.

But if you want to remain free, you must fight for your liberty.

Dwight D Eisenhower said "History does not long entrust the care of freedom to the timid or the weak".

Thankfully we have soldiers willing to fight to protect our nation and our way of life.

We set aside this day - Veteran's Day - to honor and thank them.
So thank you veterans everywhere...for your willingness to defend and sacrifice for our country.