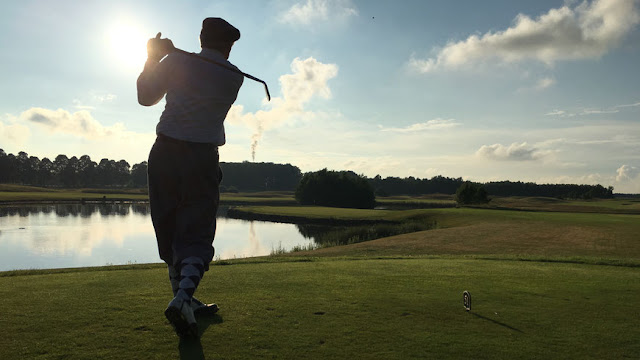 Arrived at the links at my regular time of 6:45 when I'm usually all by my lonesome...but this time there was an old Model T sitting in the lot... 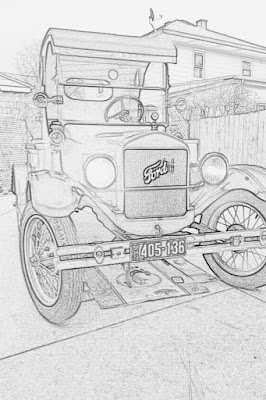 "Odd," I thought to myself as I went through my usual routine of putting on my golf shoes, grabbing my hickories... 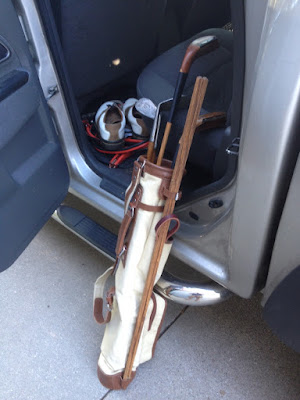 ...and hiking to the clubhouse to pay for 9.

It's the honor system this early in the morning, so I filled out the little sheet, put a fin in the envelope and dropped it in the slot.

"Gorgeous morning," I said aloud to no one as I hiked down the path to the first tee.

That's when he called to me.

I looked behind me to see who he was talking to, but of course there was no one.

"Bixler was supposed to meet me here," he repeated, "but apparently he ain't coming."

Since there was no question involved, I waited silently.

I love to play alone, I thought as I heard myself answer, "Yeah, I guess."

"Great," he replied as he stuck out his hand.  "Deuce Mulligan."

I tried to stifle a laugh as I shook his proffered hand and told him my name.

"You've got the honors," he said, motioning for me to tee it up.

I'm not good, so wasn't wild about being watched while I flailed away with my spoon.  Predictably, things did not go well and I squibbed it off to one side.

"Tough breaks," Deuce offered as he stepped up to the tee.  Pulling a brassie out of his pencil bag, he fashioned a sand tee, placed his gutta percha on it, then expertly drove it 150 yards down the center of the fairway. 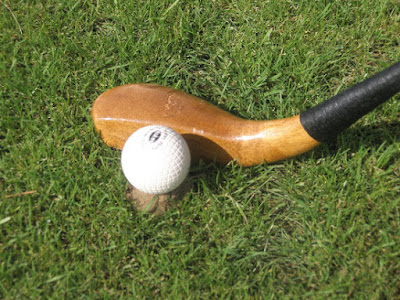 "Nice," I said without enthusiasm.  "I see you use hickories as well."

"What?" he asked, looking at me quizzically.

"Your clubs," I said, gesturing at his pencil bag, now hoisted over his shoulder.  "They're made of hickory."

He cocked his head to one side and stared at me like he was seeing me for the first time.
"What'd you think they were made of?" he asked.  "Bakelite?"

I shrugged as we started trudging toward our second shot.

"So, you a betting man by any chance?" he asked casually.  "What do you say we make it interesting for, oh I don't know...say five bucks a hole?"

He frowned and kept walking.

My journey to shot number two was considerably shorter than his, and the rest of the round pretty much followed this same pattern.  We strolled through the beautiful countryside chasing little white balls. 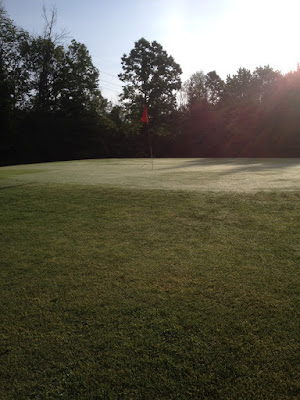 "Is that your Model T in the parking lot?" I asked him at the 4th tee.  I'd already sliced my drive into the adjoining fairway and hoped to change the subject to something that didn't involve golf.

"Yep," he allowed, as he nailed yet another drive right down the pike.  "But not for long...I'm gonna get me one of those new Model A Roadsters."

"You bet," he said, picking up his pencil bag of clubs.  "That '31 Deluxe Roadster is the berries." 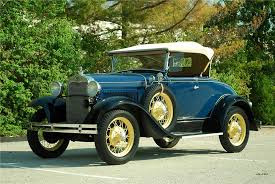 Now it was my turn to stare as if seeing him for the first time.
"Well what year is your T?" I queried.

To my surprise he actually seemed embarrassed.

"It's already 8 years old," he admitted, "just an old '23 Tin Lizzie.
"But you wait and see," he continued earnestly.  "Me and Bix got big plans and I'll be back riding around in style in no time flat."

"By hustling on the links?" I asked pointedly, but he just smiled.

"There's worse ways to snag a samolean," he replied.

To my chagrin we were joined by two of his pals on the sixth.  They seemed to appear out of nowhere, as I turned around and suddenly they were just there.

"This here's Blinky and Lefty," Mulligan said, gesturing vaguely in their direction.

One of them wore an eye patch, the other was toting a bag full of left handed clubs.

"Hi Lefty," I said as I reached out to shake his hand.

"That's Lefty over there," he said, pointing to the guy with the eye patch.
"I'm Blinky."

"Of course you are," I mumbled.

By the time we reached the green, I was away as usual. 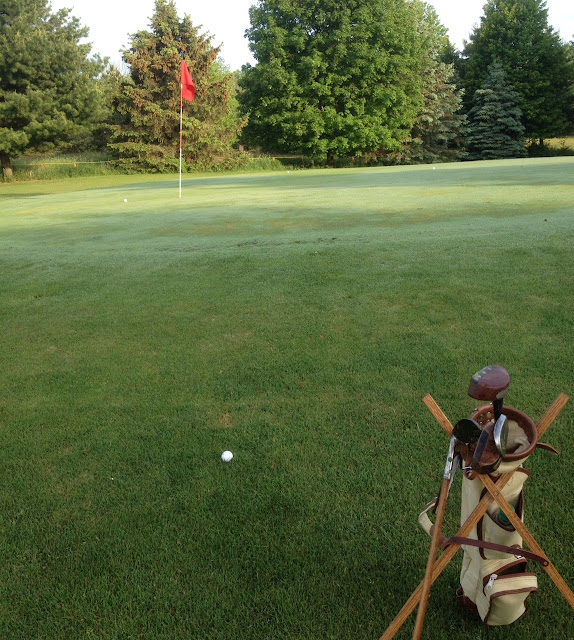 I chipped onto the green and did my usual four putt, while the others holed out in two apiece...well, all except for Lefty that is...he drained a 25 footer right in the center of the cup.

By the time we walked to the 7th tee our two ethereal tagalongs had apparently drifted back from whence they came and I saw them no more.

I thought about saying something to Deuce, but he was busy lighting up a Lucky Strike and I let it go. 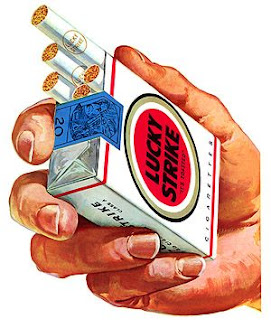 When we were finally holing out on nine I was more than ready to be done.

"A little piece of heaven," Deuce said as he shook my hand.  "Don't give up, you'll get the hang of it eventually.  But that slice..."

He wagged his head back and forth.
"It's your grip...you gotta change it."
He illustrated as if holding a club in front of him.
"And ease off a little bit, Ace," he continued.  "When you're holding your clubs you look like you're trying to choke a boa constrictor to death.  Easy Does It," he concluded.

"Good advice," I replied as he smiled, winked, then turned and walked to his truck.

I followed him over to his Model T and watched as he placed his clubs in the pickup bed.  He adjusted a couple of levers on the steering column, then walked to the front and hand cranked it a few times. 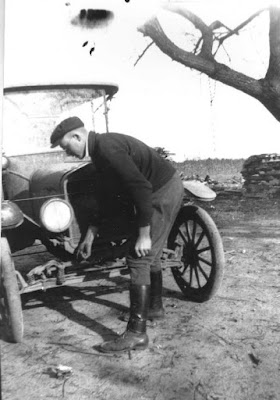 When it roared to life I couldn't help but smile.

He climbed in, waved once, then lurched into gear and headed for the road.

I turned toward my truck but spotted his scorecard on the ground.  Picking it up I glanced at the 39 he carded, then turned back to where he was a second ago.

I looked left, then right...but all I could see was a drifting cloud of dust and an old dirt road.
Yessir...strange goings on this weekend...